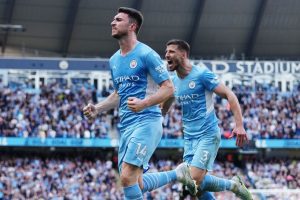 Manchester City moved one step closer to retaining their Premier League crown after thrashing Newcastle 5-0 at the Etihad.

Raheem Sterling ghosted into space at the back post to nod City into an 18th minute lead before Aymeric Laporte bundled home a second 20 minutes later. Rodri and Phil Foden scored before Sterling netted his second of the afternoon in the dying moments for City, who cruised to a crucial win just days after suffering Champions League heartbreak.

Here, Daily Star Sport takes a look at the big calls that Pep Guardiola got spot on as City took full advantage of Liverpool's slip-up against Tottenham to open up a three point lead at the top of the table…

After Liverpool dropped precious points less than 24 hours earlier, City knew they had the opportunity to take control of the title race with a positive result against Eddie Howe's side – and they wasted no time in trying to beat the Magpies into submission.

City were at it right from the off and could, and arguably should, have scored twice in the opening 15 minutes. Laporte and Joao Cancelo spurned golden chances to break the deadlock, and Newcastle almost made them pay through Chris Wood.

But Sterling settled any nerves at the Etihad with his clinical headed finish to ensure City's aggressive approach paid dividends.

Putting Sterling back in

What did you make of Man City's performance against Newcastle? Let us know in the comments section.

Just days after being snubbed for the biggest game of City's season, Sterling was in the right place at the right time to break the deadlock for Guardiola's side.

The England star has bagged some huge goals for City this year – but his stooping header to start the rout against Magpies could be the most important one yet. The result was never in doubt after Sterling bagged his 15th strike of the season and City were able to move into cruise control for the rest of the afternoon. The points were safe well before he notched his 16th of the season in the final moments.

After emerging as England's main man back at Euro 2020, there were concerns over Sterling's role at the Etihad. But Sterling has delivered the goods consistently for City this year; so much so that only Riyad Mahrez (24) has managed to outgun him.

Guardiola made a handful of changes after City's midweek implosion against Real Madrid, but Kevin de Bruyne was given the chance to make amends after his ineffective performance at the Bernabeu.

And unfortunately for Newcastle, they were simply in the wrong place at the wrong time as De Bruyne made an emphatic return to form. The Belgian maestro ran the show for City and would have bagged two assists in the opening 15 minutes were it not for shocking misses from Cancelo and Laporte.

It was a relentless display from City's talisman, who ensured that his side wouldn't suffer a European hangover in their bid to thwart Liverpool's remarkable quadruple bid.

The absence of Kyle Walker in recent weeks has caused issues for City, but moving Cancelo over to the right-hand side has potentially solved a major problem.

The Portuguese full-back has been one of City's most consistent players operating on the left-hand side, but he was just as effective operating from the opposite flank. Cancelo was at his rampant best and was unfortunate not to bag a goal.

Oleksander Zinchenko was also impressive deputising for Cancelo on the left-hand side. Both will face sterner tests defensively than Newcastle – who failed to lay a glove on City – but it appears Guardiola has come up with an adequate solution if Walker does miss the rest of the season.