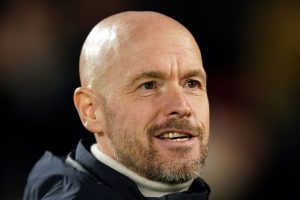 Manchester United have won the 'Roy Keane derby' 3-0 for the second time this season after seeing off Nottingham Forest in the EFL Cup semi-final first leg at the City Ground.

Another stunning solo strike from Marcus Rashford opened the scoring before Wout Weghorst grabbed his first United goal, with Bruno Fernandes completing the rout late on to give Erik ten Hag's men an almost uncatchable lead heading into next week's return fixture.

Here, Daily Star Sport runs through the four things we feel United's head coach got right and one we feel he got wrong during a tricky, but ultimately triumphant evening in Nottinghamshire – starting with what he got right:

READ MORE: Marcus Rashford 'in form of his life' running from Man Utd half to score

Wout Weghorst has had a quiet start to life at Old Trafford – generally lumbering between disinterested centre backs as his team-mates knock the ball around him – but the Dutchman finally opened his United account this evening, and has Ten Hag's continued faith to thank for that.

Anthony Martial's injury might have forced the manager's hand in many ways, but Ten Hag could've easily taken the big man out and stuck free-scoring Rashford up top.

Instead, he stuck to his guns and had Weghorst leading the line for the third game in a row, and it finally paid dividends, with the ex-Burnley man latching on to Antony's parried shot to give United a two-goal cushion right on half time.

Will Man United win the EFL Cup? Let us know what you think in the comments section below.

Not resting too many key names

It would've been easy for Ten Hag to field a weakened side tonight given that United are currently fighting on four fronts, but his decision to start most of his big guns proved a smart one.

Though burnout is obviously a possibility when you're playing so many matches, it's probably worth risking when you're in as strong a run of form as United currently are (defeat to Arsenal aside).

Rashford, Fernandes, Casemiro, Eriksen, De Gea, Martinez and Antony all started, suggesting that Ten Hag considers success in the EFL Cup just as important as success anywhere else – and you can bet that determination rubbed off on his players.

Despite starting many of his key players, Ten Hag recognised when it was time to sub them off.

Mid-way through the second half he took Rashford, Antony and Eriksen out, replacing them not only with fresh, young legs in Alejandro Garnacho and Facundo Pellistri, but also with the solidifying presence of Fred.

Game management will be key for United in the coming weeks as the fixtures begin to pile up, but if Ten Hag is as sensible and as switched on as he was this evening, they stand a decent chance of navigating the period well.

Malacia in for Shaw

It was a simple change, but a smart one in hindsight.

Luke Shaw had a torrid evening marking Bukayo Saka during United's 3-2 defeat to Arsenal on Sunday, so dropping him for Tyrell Malacia did two things.

It gave the Englishman – who has started all but two of United's matches since the World Cup – the chance to rest, and negated the chances of his poor performance at the weekend carrying over into what was always going to be a tough, intense evening's football.

And now, one he got wrong:

Given that they're still in all four competitions the games are coming thick and fast for United, so although resting Raphael Varane wasn't the weirdest of decisions, it arguably backfired.

Ten Hag's side looked a little shaky at the back with Victor Lindelof failing to replicate his French team-mate's confidence and calmness on the ball, or indeed his physicality.

After his defenders were given a bit of run-around against Arsenal over the weekend, Ten Hag probably should've played it safe. They got away with it tonight, but had Sam Surridge's first-half goal not been ruled out for a marginal offside things might have been very different indeed.