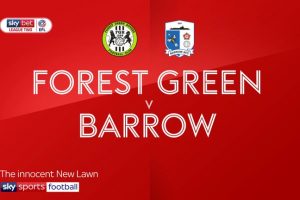 Barrow guaranteed their League Two safety with a 2-0 victory over promotion-chasing Forest Green.

The damage was done in the first half with Scott Quigley’s penalty and a close-range Bobby Thomas effort taking them clear at the break and the lacklustre home side rarely looked like clawing their way back into the game.

The opener came after 18 minutes when Thomas was upended by Udoka Godwin-Malife inside the area and Quigley made no mistake with the spot-kick.

Thomas added the second after 25 minutes, firing into the roof of the net when he pounced after Rovers keeper Luke McGee had managed to keep out a blistering Calvin Andrew drive.

Aaron Collins put a header wide to squander Forest Green’s only chance of the half before Barrow went close to a third seconds before the interval when Neal Eardley’s free-kick rattled the outside of the post.

Barrow keeper Joel Dixon was finally called into action early in the second half to tip Jake Young’s effort over the bar but that proved to be Rovers’ only effort of note as their play-off hopes suffered a setback.