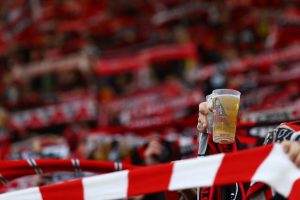 A fan-led review into how football is governed in the UK could see supporters allowed to drink beer in the stands during matches again.

Former Sports Minister Tracey Crouch has submitted a lengthy proposal to Government demanding a series of key changes to the way football is run in the country.

Among other things, the proposal called for fans to be allowed to bring booze back to their seats and suggested an initial trialling of the rule change during League Two and National League matches.

In theory, the move could help reduce the amount of binge-drinking before matches.

Elsewhere, the proposal suggests a number of ground-breaking rule-changes that would allow fans to be more involved in club matters, and stop any threat of another European Super League breakaway.

It warned the men’s game stands at a "financial precipice" and "fans have lost faith" in the way clubs and the game in general is run.

One recommendation is for supporters to be given 'Golden Shares' in their club to allow them to veto changes to club badges and stadium moves.

Another suggests letting fans set up a 'shadow board' in order to have greater to say over ticket and replica shirt prices.

In order to protect clubs from going out of business, the proposal recommends a 'fit and proper persons' test for prospective new owners which also would include formal checks of their financial and moral integrity.

Should fans be allowed to drink in stadiums? Let us know your thoughts in the comments section below…

The 162 page document also suggests ditching the 'parachute payment' system, arguing that it "distorts the market", and asks that women's football be treated "with parity" by way of creating action plans for equality, diversity and inclusion within the sport.

"The Review has formed the firm belief that our national game is at a crossroads with the proposed European Super League just one of many, albeit the most recent and clearest, illustrations of deep seated problems in the game," Crouch said.

"I believe there is a stark choice facing football in this country. As was remarked to the Review, for all the good owners in the game clubs are only one bad owner away from disaster."