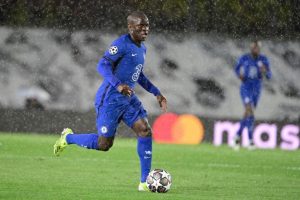 World Cup-winner Kante produced a man-of-the-match display as Chelsea secured a 1-1 draw in the first leg in Madrid for a narrow advantage in the two-legged tie.

Kante has been ever present in Chelsea’s midfield this season, making 43 appearances in all competitions, and is expected to play an important role later on Wednesday.

“He’s a top guy,” Tuchel told reporters. “He’s the guy you need to win trophies … that’s why we’re are so happy he’s here and he’s at our club.”

Kante has won the Premier League, Europa League and FA Cup titles since joining the London club in 2016 and Tuchel backed the 30-year-old to add the Champions League crown to his collection.

“It’s a pleasure to watch what he’s doing with the mentality of a real helper … he’ll always give everything to help out on the pitch – it’s a fantastic combination,” former Borussia Dortmund and Paris Saint-Germain manager Tuchel added.

“For me he’s an example … he’s an unbelievable input for any team in the world.”

The winner of the semi-final on aggregate will take on Manchester City in the final in Istanbul on May 29.