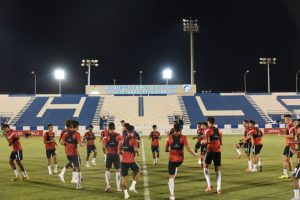 SINGAPORE – The Lions may be wounded but judging by the fighting talk from head coach Tatsuma Yoshida and stand-in captain Yasir Hanapi, there is a steely determination within the team as they prepare to face Palestine on Thursday (June 3).

The World Cup Group D qualifier will be Singapore’s first competitive outing in 18 months, following their 2-1 away win against Yemen. The coronavirus pandemic has meant all five teams, including host Saudi Arabia, will finish their remaining fixtures in Riyadh.

Yoshida, appointed in May 2019, will take charge of his 10th game with the Republic. He said: “The players out are a big loss for us and for me. But we don’t need to speak about the players that are not here.

“The team want to play, they want to show how we can play football. They want to prove themselves. Now is the time for them to do this and they are ready to go.

“Palestine are a very strong team but we have prepared well and we have to try to get three points.”

The Japanese, 46, has set a target of claiming four points the three games against Palestine, Uzbekistan (June 7) and Saudi Arabia (June 11). He will however, be without captain Hariss Harun (personal family reasons), forward Ikhsan Fandi and key defender Safuwan Baharudin (both injured).

In Safuwan’s absence, veteran centre-backs Baihakki Khaizan or Madhu Mohana are likely to line-up beside Irfan Fandi at the King Fahd International Stadium.

Yoshida said: “I expect these players to step up. They are not replacements. They have their own character and style and they will bring something different to the team. I have expectations on them. I trust all of my players.”

Yasir, 31, will lead the team for the first time and the Tampines Rovers captain backed his teammates to rise to the occasion.

“I believe we have the players to do the job,” he said. “The players who will come in will need to step up. We can play well without them (Ikhsan, Hariss and Safuwan) and we have to believe in that.

“If we want to have something (to show) from this campaign, we have to win this match against Palestine.”

After five games, Singapore are third with seven points behind leaders Saudi Arabia (11) followed by Uzbekistan (nine). Yemen have five points, one more than Palestine.

Palestine are ranked 104th in the world , 55 places above Singapore, but have their own personnel issues. Goalkeeper coach Makram Daboub has been installed as interim head coach. The Lions of Canaan are also without three key starters – left-back Abdallah Jaber, midfielder Nazmi Albadawi and forward Mahmoud Wadi.

Bassil Mikdadi, editor of the Football Palestine website, singled out attacker Oday Dabbagh as a key threat due to his pace and intelligent runs. He added: “Despite the ongoing Israeli-Palestinian conflict, the dynamics within the team has always been positive.

“The players relish and know the responsibility of playing for Palestine at this time.

“What has happened over the last two months, will push them to try and get a good result for the fans and represent Palestine in a positive way.”

Yasir is as eager to put a smile on Singaporean faces. He said: “Looking at training, the motivation is really high. We don’t want to waste the trip because we have sacrificed a lot to be here – away from our family and kids. I believe our guys won’t take this chance for granted.”