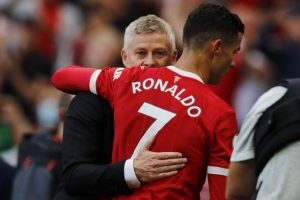 Solskjaer, who played with Ronaldo towards the end of his career, said he had no hesitation in throwing the Portuguese striker straight into his side for his first game since his move from Juventus last month.

“I’m so happy for him, so happy for the team, the supporters, you can sense the atmosphere around the club since Cristiano signed but it could so easily have been an anti-climax because expectations were so high – but he has delivered again,” said the Norwegian.

Asked about the atmosphere at the ground – where fans stayed behind long after the whistle singing Ronaldo’s name – Solskjaer couldn’t resist the sense of nostalgia.

“It feels like the old days to be honest, it is special, Cristiano is a special man, a special player in the history of the club and coming here he has just shown his love for the club and the supporters love him, of course,” he said.

Solskjaer added that the 36-year-old has returned after 12 years an improved all-round product.

“He’s developed into a miles better footballer than when he was here, through the years. Sometimes he can drift up to the sides, you’re not going to use him as a battering ram. He likes to roam.

“He senses the big moments when to arrive in the box and I thought he played the game very, very mature. He gave one ball away. But he was very efficient with his football,” he said.

Bruno Fernandes crowned the celebration with a long range goal to make it 3-1 and Solskjaer said he had no doubt that the pair could combine well together.

“Good players can always play together. They have a mutual respect and play for Portugal together,” he said.

But despite the euphoria of the occasion, Solskjaer wasn’t reading too much into the team going top of the standings after four games.

“It’s too early for me to predict where we’ll end up. We have to be consistent and let’s see where we are,” he said.