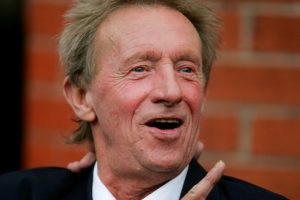 LONDON (AFP) – Scottish football legend Denis Law revealed on Thursday (Aug 19) he has been diagnosed with “mixed dementia”, adding that he wanted to “address the situation” while he was able to.

The 81-year-old’s fellow Manchester United great Bobby Charlton – the two of them feature in the United Trinity statue outside Old Trafford alongside the late George Best – was diagnosed with dementia in November last year.

Law scored 237 goals in 404 appearances for United (1962-73) and the player nicknamed “The King” ended his career with a second spell at Manchester City.

He appeared at the 1974 World Cup Finals and remains Scotland’s joint top scorer with 30 goals in 55 appearances.

“I am at the point where I feel I want to be open about my condition,” Law said in a statement.

“I have been diagnosed with ‘mixed dementia’, which is more than one type of dementia, in my case this being Alzheimer’s and vascular dementia.

“The time has come to tackle this head on, excuse the pun.

“I recognise how my brain is deteriorating and how my memory evades me when I don’t want it to and how this causes me distress in situations that are beyond my control.

“I do understand what is happening and that is why I want to address my situation now whilst I am able, because I know there will be days when I don’t understand and I hate the thought of that right now.”

Law, who also had a spell in Italy with Torino (1961-62), said he would no longer be able to sign shirts or autographs but he hoped to still go and watch his beloved United.

“Apologies to anyone who has sent me anything but I am just not able (to sign anything),” he said.

“I am trying to be positive and determined to continue watching my club, Manchester United at Old Trafford, hopefully this will be a season of success and I am excited by the new signings that Ole (Gunnar Solskjaer) and the club have made.

“I know the road ahead will be hard, demanding, painful and ever changing and so ask for understanding and patience as this will not be an easy journey especially for the people who love you the most.”

United issued a statement saluting one of “their greatest legends”.

“We applaud Denis’ brave words and will continue to offer whatever support we can as he adapts to this challenging condition,” the club said.