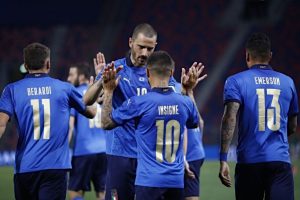 BOLOGNA (REUTERS) – Italy swept aside the Czech Republic 4-0 on Friday (June 4) with a ruthless attacking display and all-around performance that could make them a dangerous side when Euro 2020 kicks off next week.

Lazio forward Ciro Immobile put the hosts ahead in the 23rd minute against the run of play when he latched onto a weak clearance and swept the ball into the net after it took a slight deflection off a Czech defender.

“It is still early to say where we can go, but we know what we are capable of,” said Napoli midfielder Lorenzo Insigne, who scored and had an assist to mark his 30th birthday.

“The coach has created a great group, he has given us the conditions to be able to express ourselves at our best.”

Euro 2020 will mark Italy’s return to a major tournament following a five-year gap. After reaching the quarter-finals of Euro 2016, they failed to qualify for the 2018 World Cup in Russia.

Italy face Turkey in the opening game of the tournament at Rome’s Stadio Olimpico on June 11 before hosting Switzerland and Wales in the Italian capital to complete their Group A fixtures.

Inter Milan midfielder Nicolo Barella doubled the lead for Italy just before the break when he dribbled toward goal and fired a shot home from just outside the penalty area.

In the second half, Italy knocked the ball around in midfield and picked apart the Czechs who could not hold possession or find any space to create chances.

Insigne made it 3-0 in the 66th minute when he took an Immobile pass and sent a sharp right-footed strike past the keeper. Insigne turned provider minutes later when he set up Domenico Beradi, who completed the scoring.

The Czechs will seek to regroup against Albania on Tuesday in another tune-up for the tournament where they will face favourites England, host nation Scotland, and 2018 World Cup finalists Croatia in Group D.