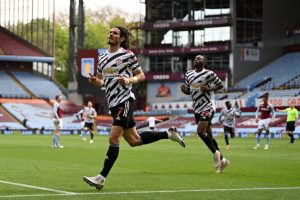 BIRMINGHAM, England (REUTERS) – Manchester United fought back to beat Aston Villa 3-1 away in the Premier League on Sunday (May 9) as Bruno Fernandes, Mason Greenwood and Edinson Cavani scored in the second half to put on hold the title celebrations of champions-elect Manchester City.

The result left United second on 70 points from 34 games, 10 behind City who have played a game more and missed a chance to secure the title on Saturday after they suffered a 2-1 home defeat by Chelsea.

Bertrand Traore fired Villa ahead in the 24th minute with a brilliant strike into the top corner from 15 metres after some sloppy defending by the visitors, who gave the ball away several times deep in their own half.

Fernandes equalised with a 52nd-minute penalty, sending Villa goalkeeper Emiliano Martinez the wrong way with a coolly taken spot-kick after a series of clumsy challenges by Douglas Luiz sent Paul Pogba tumbling over.

Greenwood turned the match on its head four minutes later with a neat shot on the turn from inside the penalty area after he shook off Villa centre-back Tyrone Mings.

Substitute Edinson Cavani sealed United’s victory with a glancing 87th-minute header before Villa striker Ollie Watkins was sent off, having received a second yellow card after he was adjudged to have dived in United’s area.