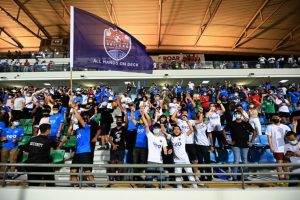 SINGAPORE – The Lion City Sailors’ grand ambition to build a new stadium in Singapore – a first of its kind if it comes to fruition – could cost anything from above $100 million to $1 billion, say property experts and sports insiders.

On Tuesday (Nov 23), The Straits Times reported that the Singapore Premier League football club, who are backed by the billions of Forrest Li, the founder of Garena and Shopee, were in discussions with local authorities and private entities to build a new facility here, with the location and size of the venue yet to be determined.

The SPL’s eight clubs played their matches at five venues this term, with the smallest being Albirex Niigata and Tanjong Pagar United’s Jurong East homeground (2,070) and the largest the Young Lions’ Jalan Besar (6,000) stronghold, which is also the Football Association of Singapore’s headquarters.

While the Asian Football Confederation Champions League – which the Sailors will compete in next season – does not mandate a minimum stadium capacity, insiders suggest that the stadium could have between 20,000 and 40,000 seats.

Property experts and insiders noted that with the high costs of land here, building a facility would require a huge financial outlay, with one calling the project “quite incredible” for a private outfit like the Sailors to undertake.

Nicholas Mak, ERA Realty’s head of research and consultancy, told ST that the stadium would cost “at least $100 million”.

“In terms of financial feasibility, they are not Manchester City, Barcelona or Milan and don’t have wide coverage or a huge customer base,” he said.

“The reason why the Government is building (sports facilities) is they may not even break even. The Government does it because it is part of infrastructure plans, for people’s health and well-being.

“It’s quite incredible for someone to buy the land and build your own stadium.”

Former Singapore Sports Hub chief executive officer Oon Jin Teik pointed out that there are three ways to obtain land in Singapore: Work through national sports agency Sport Singapore for land allocated for sports purposes, participate in a Singapore Land Authority (SLA) land tender at market prices, or rent the land from an owner though the land has to be allocated by SLA for sports use.

The former national swimmer worked at the Sports Hub for five years and was previously CEO of the Singapore Sports Council (now known as Sport Singapore) from 2004 to 2010.

Lee Sze Teck, senior director (research) of real estate agency Huttons Asia noted that the stadium would need to be “multiple usage like supporting leisure and commercial space” to be viable.

He added: “Things that come to mind will be a sports school to nurture talents, a gym, destination mall. There can even be a sports-themed hotel. All these complementary uses will keep the stadium commercially viable and vibrant on non-match days.

“To host Fifa international matches, the stadium needs to have a minimum seating capacity of 40,000. Depending on the eventual usage, the estimated land required might be between 15 and 20 hectares. It could easily cost $1 billion.”

Lee noted that the Sailors’ current training academy site at Mattar Road would be the “ideal place” for the new stadium though it was too small.

Deloitte South-east Asia sports business group leader James Walton said the “biggest way to recoup” the investment is for the Sailors to find a sponsor.

A 40,000-seater stadium could also offer an alternative to the 55,000-seater National Stadium, particularly if Singapore does play a role in Asean’s idea to bid for the 2034 World Cup, he said, adding that it could also host the Youth World Cup or regional tournaments and championships.

Mak suggested that the Sailors could use an existing facility rather than build a new venue. He said: If they have the money, of course there is a possibility to explore. Unless the land is private, you will need Government consent to rezone it.

“But will it be a white elephant? In Singapore, we have the Sports Hub which is underutilised… If you look at the Sports Hub and Turf City, how is the retail doing there?”

While acknowledging that there is a gap to be filled between Jalan Besar Stadium’s capacity of 6,000 and the National Stadium’s 55,000, Oon suggested that the Sailors could look at working with the authorities to convert an ActiveSG stadium – which comes under the purview of Sport Singapore – for their use.

He added: “They can build additional facilities for the public to use, like a jogging track outside the stadium. It can become like a Public-Private-Partnership, a model for other ActiveSG stadiums.”