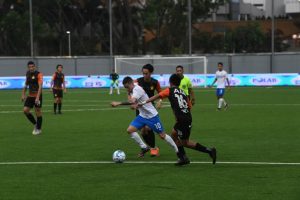 SINGAPORE – Hougang United cast aside reputation and let their abilities do the talking as they shocked the star-studded Lion City Sailors 3-1 in a Singapore Premier League football match at Jalan Besar on Saturday (March 20).

Hougang coach Clement Teo was fully aware of his opponents’ prowess – they boast the most expensive player in league history in Diego Lopes and have nine players who were called up to the latest Singapore national squad on Thursday – and had called on his charges to win every individual battle. The Cheetahs obliged and claimed an early-season scalp.

More importantly perhaps, they showed that the Sailors, who are among the favourites to lift the SPL title, can be beaten with a high-pressing approach.

The visitors started the game like a starved animal. Hassling and harrying their opponents for every ball, Hougang looked to choke the Sailors into an early submission.

And in the 20th minute, their ferocious start yielded a deserved opener.

The Sailors and Singapore shot stopper Hassan Sunny failed to collect a corner whipped in by Kaishu Yamazaki, leaving Lionel Tan to sweep in the loose ball.

Seconds later, the Cheetahs pounced on another gaffe from Hassan, the goalie slipping while attempting to clear an under-hit pass from teammate Tajeli Salamat. Hougang’s Japanese forward Tomoyuki Doi was only too happy to slot the ball into an empty net for his third goal in as many games.

Sailors coach Aurelio Vidmar threw on star midfielder Lopes and Lions winger Gabriel Quak in an attempt to turn the game around. But the Cheetahs did not let up in the second half, starving Lopes of the ball by closing down every blade of the artificial turf.

Doi then clinched his fourth goal of the season when his shot from the edge of the box crept past Hassan to give Hougang a 3-0 lead in the 59th minute.

In the 86th minute, former Hougang forward Stipe Plazibat got a consolation for the hosts, stabbing in a rebound after Mukundan Maran had spilt the ball.

Teo said: “The players’ attitude and mentality was great. And they delivered what I asked for, which was to win their individual battles. The game plan to shut them (Sailors) down quickly was something we worked on very hard.

“I’m very surprised by how well we executed the game plan. I’m proud of the boys.

“We have been trying to get the boys to perform to a certain level. Sometimes we fell short but today we showed the belief and the hunger and what is possible when we work together.”

In the evening’s other match, the Young Lions held Geylang International to a 1-1 draw.

Tipped to sweep all before them, the Sailors assembled arguably the strongest squad in the league this year with Singapore football’s first multi-million dollar signing Lopes the cherry on the top. In 2019 SPL player of the year Faris Ramli and last season’s top scorer Plazibat, the Sailors’ attack would give most teams a run for their money, even in the region.

But with six goals conceded in just three matches, it is clear that they are vulnerable at the back.

Just as they did against Tampines Rovers in their opening 3-3 draw, the Sailors let in cheap goals, with the Amirul Adli and Tajeli partnership flattering to deceive once again.

Further back, Hassan has not enjoyed the best of starts to the season.

If the Sailors are to dethrone defending champions Albirex Niigata, then they need an anchor at the back. The debut of their injured Brazilian defender Jorge Fellipe, another new acquisition, cannot come too soon.