Football: Heartbreak for Howe as Newcastle drop to last despite goal-packed draw 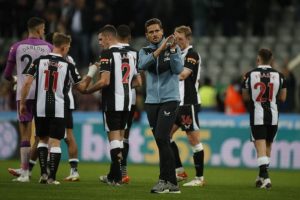 NEWCASTLE, ENGLAND (REUTERS) – Newcastle United’s French winger Allan Saint-Maximin rescued a point for his side in a thrilling 3-3 Premier League draw with Brentford on Saturday (Nov 20), as new Magpies coach Eddie Howe got a glimpse of the scale of his challenge on Tyneside.

Former Bournemouth boss Howe, watching from a hotel room due to a positive Covid-19 test, will have been pleased with the tenacity of his side and their positive play but not that they conceded three goals for the third successive home game.

Despite twice coming from a goal down, Newcastle dropped to the bottom of the standings on six points below Norwich City who beat Southampton 2-1 at Carrow Road.

“I feel a bit bad today because I tried to do my best to help my team, but it’s still the same again – I score but we draw. So I will do my best and make sure the next time I score it is to win the game,” Saint-Maximin told the BBC.

“But it’s so important (the result) because it is better to draw than lose, and I think the team showed good character because it is not easy to come back. We just have to keep going, stay together and try to do our best to win the next game.”

Jamaal Lascelles headed Newcastle in front after 10 minutes, meeting a Matt Ritchie cross. But their joy was short-lived as Brentford equalised 75 seconds after the restart through the right boot of Ivan Toney, scoring against his former club.

The visitors then went ahead after the half hour mark when Rico Henry headed in a cross from Sergi Canos.

It was then Newcastle’s turn to hit back, this time through Joelinton shortly before the break. The Brazilian fired in from the middle of the penalty box for his first goal of the season.

The hosts came out energised in the second half, playing nice football but without a clinical touch in front of goal.

They were left to rue their profligacy as a speculative curling effort from Brentford’s Frank Onyeka in the 61st minute took a wicked deflection off Lascelles and went in beyond goalkeeper Karl Darlow.

That sucker-punch looked to have taken the wind out of the home side’s sails until Saint-Maximin popped up in the 75th minute to strike the ball into the bottom left corner.

The team received plenty of applause from the home supporters after the final whistle but despite the result, Newcastle slipped to the foot of the table.

Howe’s side, now backed by a hugely wealthy Saudi Arabian consortium, are five points from the safety zone.

Brentford are 14th with 13 points from 12 games, continuing to impress in their debut Premier League campaign. However, manager Thomas Frank was disappointed with his side’s defending.

“We were at a big party and we weren’t invited. We showed great mentality, but we didn’t defend well enough today – we gave too much away,” he said.