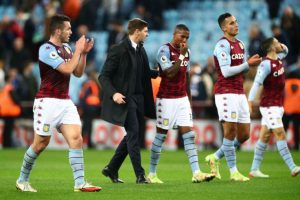 Gerrard was taking charge of his first Villa match after leaving Scottish champions Rangers during the international break to replace Dean Smith.

The former Liverpool star saw Watkins and Mings strike in the final six minutes to give Villa their first win in six Premier League games.

Smith was sacked after five successive league defeats, but Gerrard made an immediate impact as Villa climbed four points clear of the relegation zone.

Gerrard is the first Villa manager to win his maiden Premier League game in charge since John Gregory in 1998.

Swopping a Scottish title race for the tension of a relegation fight south of the border, Gerrard’s return to the Premier League was trumpeted as a stepping stone to eventually landing his dream job at Liverpool.

But Gerrard is adamant he is focused on turning Villa into a serious Premier League force capable of qualifying for Europe.

For now, he would settle for leading Villa away from the relegation zone in his first taste of Premier League management.

In his first match programme notes, Gerrard promised that “standards will be extremely high” as he made it clear avoiding relegation this term must be a springboard to more productive seasons in future.

One of his first noteworthy decisions was to ban tomato ketchup from Villa’s training ground canteen as he tries to improve his players’ fitness and they showed no signs of flagging against Brighton.

Gerrard immediately prowled the technical area barking orders to his players and Villa almost responded to the cajoling with an early goal.

Matt Targett’s cross picked out Matty Cash and his header forced a good save from Jason Steele.

Brighton enjoyed plenty of possession after that Villa near-miss, coming close to the opening goal through Leandro Trossard.

Marc Cucurella’s pass dropped to Trossard in the Villa area and his strike forced a fine save from Emiliano Martinez.

Chances were at a premium for Villa but England defender Mings saw a long-range drive deflect narrowly wide.

Mings went even closer early in the second half when his thumping header was tipped over by Steele.

Gerrard appealed in vain for a penalty when Solly March’s challenge sent Cash tumbling to the turf.

Brighton were holding on comfortably until the 83rd minute when Watkins took possession just inside the Brighton half, surging into the Albion area before curling his shot into the far corner.

Five minutes later, Mings intercepted Adam Webster’s attempted clearance from a corner and fired into the roof of the net to give the Gerrard era lift-off.