Football Australia has entrusted two-time A-League winning coach Ernie Merrick with the weighty task of resetting the country’s football identity and agenda after appointing him to a powerful new technical role.

In a surprise move, the Herald and The Age can reveal Merrick has agreed to become Football Australia’s first chief football officer, a big-picture position with a wide-ranging remit that essentially gives him the keys to the on-field future of the Socceroos and Matildas.

Football Australia began advertising in March – at the most precarious point of the Socceroos’ shaky World Cup qualification mission – for a “disruptor” who could make a “transformational impact” on the next generation of players and coaches, amid rising concerns that Australia was being left behind by the rest of the world in development.

Few would have expected Merrick to emerge as the winning candidate. There were plenty of foreign options in what chief executive James Johnson said was a competitive field but, ultimately, Football Australia has put its faith in local knowledge to fix local problems rather than importing foreign expertise, as the federation has previously done for similar technical roles to mixed results.

“We wanted someone that could be disruptive when necessary. And my view on Ernie is he has strong views on football. We want those strong views to be put at the very forefront of our thinking. 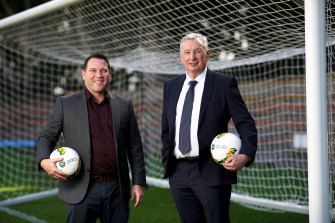 “We want to be able to drive football change, and we think Ernie’s got the skill, the diplomacy, but also he’s got different gears when he needs to get things done. We can’t wait for him to start, we think it’s going to be a great thing for football.”

Merrick, 69, will be seen as an underwhelming choice by some due to his relative lack of profile or overseas pedigree, but he is widely respected within the game and has amassed four decades of knowledge of the Australian system.

Football Australia will now lean heavily upon that wisdom to set the country’s football direction.

Born in Scotland where he played semi-professionally, Merrick moved to Melbourne in 1975 and swiftly rose through the football ranks as a coach – first at local level, then the old National Soccer League, the Victorian Institute of Sport (where he had a hand in the development of players like Vince Grella, Mark Bresciano and Simon Colosimo), and then in the A-League, where he managed three different clubs. He also had a short stint as coach of the Hong Kong national team. 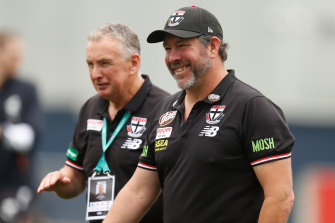 When he coached Victory through an iconic era for the club between 2005 and 2011, the football they played was always easy on the eye, and in his last job at Newcastle Jets, he took them to a surprise grand final appearance in 2019 on one of the league’s most meagre budgets.

Sacked by the Jets in January 2020, Merrick has not worked with a team since, and it seemed as if his days of working at the top level were reluctantly at an end. This year, he has been working as a mentor for Brett Ratten, coach of AFL club St Kilda. Merrick has now accepted what he says is the most important job of his career to date.

“I’ve never been one for retirement. I’ve always been a worker, and I’m really, really looking forward to having an influence – a positive influence, I hope – on football in this country,” Merrick said.

His top priority is a review of Australia’s development pathways and improving the national coaching curriculum in line with best practice in football abroad.

Asked where Australia was getting things wrong, Merrick said: “Well, I can’t say that until I can conduct a full review, but I think we’re doing a lot of things right.

“We have qualified for the fifth time for the [men’s] World Cup. The Matildas have been in the top 10 nations in the FIFA rankings until recently. We’ve got our youngsters playing in an under-20 women’s World Cup over in Costa Rica in August. There’s a lot of things going well, but it’s all about continuing to grow, develop, innovate and drive positive change. And that’s what I’ll be aiming to do.”

Merrick will have a very broad range of responsibilities as chief football officer, from advising Football Australia on football matters and global trends, helping to define and set a ‘national style’ of play.

He will also oversee coach education programs, help optimise player development systems and assist Johnson in pushing through proposed reforms like the domestic transfer system and national second division, which he said was a “crucial” missing piece of the puzzle in Australia.

“The persona I portray on match day, with my dour face, people think I’ll be a good disrupter, but I’m not really very good at that. I think I’m better at convincing people of the way forward and collaborating and cooperation,” Merrick said.

“If we’re going to be successful, innovate, change and grow to a stronger level of football … we’ve all got to work together. And I think that’s where my strength is.”