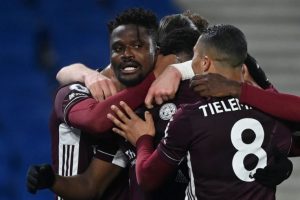 BRIGHTON, ENGLAND (REUTERS) – Leicester City climbed back into second place in the Premier League as they came from a goal down to win 2-1 at Brighton & Hove Albion thanks to a late goal by Daniel Amartey on Saturday (March 6).

Adam Lallana scored his first goal for Brighton in the 10th minute and was close to adding a second when he hit the post with a header before halftime.

Brighton also had a goal disallowed in the first half but Leicester improved after the break and Kelechi Iheanacho equalised in the 62nd minute.

The hosts looked nervy late on and Amartey stooped to head in from close range in the 88th minute.

It was tough on Brighton, who remained down in 16th position, three points above the relegation zone after three narrow defeats in a row.