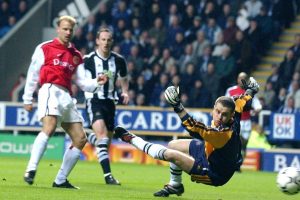 Denis Bergkamp produced a moment of magic 19 years ago as he scored the goal of a lifetime against Newcastle United, and Daily Star Sport has picked out four other unique goals.

Bergkamp's incredible solo goal against Newcastle is widely regarded as the best of his career.

The Dutchman received the ball with his back to goal before flicking it around Nikos Dabizas before turning and passing the ball into the bottom corner.

Fans are still undecided on whether he meant it or not, but either way it is considered one of the best goals in Premier League history.

Daily Star Sport has singled out five other unique goals.

Paolo Di Canio's wonder goal against Wimbledon is one of the finest of his career.

The Argentine, then at West Ham, was played the ball on the left wing, with the ball going away from goal.

Di Canio leapt into the air and struck the ball first time with a scissor kick, sending his shot flying into the top corner.

Zlatan Ibrahimovic is known as being a flambouyant player and for producing moments of magic on the pitch.

But perhaps his best strike came for Sweden in a friendly match against England back in 2012.

The tall striker capitalised on a Joe Hart header which failed to clear the halfway line.

While sprinting abckwards, Ibrahimovic launched himself into the air and slammed an overhead kick over Hart and into the net.

Mario Balotelli's time at Manchester City was short but sweet, as he scored 13 times in City's Premier League title-winning campaign.

He was better known perhaps for his antics off the field, and brought that same flair to the pitch against Norwich.

After seeing a shot saved by John Ruddy, the ball soared over the goalkeeper and appeared to be set to fall into the net.

But Balotelli had other ideas, as he stood beneath the crossbar and tapped the ball home with his shoulder.

Liverpool fans will have bad memories of their trip to the Stadium of Light from October 2009, as Darren Bent scored one of the more bizarre goals in history.

The Sunderland striker received the ball on the edge of the penalty area and fired a shot low at the goal.

However, the ball deflected off a beach ball thrown onto the field by travelling Reds fans.

Despite Liverpool's objections, the goal counted and Sunderland went on to win 1-0.

Manchester United winger Nani took advantage of a bizarre refereeing mix-up to score against Tottenham in 2010.

The Portuguese ace thought he'd won his side a penalty in the final five minutes of the match, which United were winning 1-0 at the time.

However, despite going down and handling the ball, referee Mark Clattenburg didn't blow his whistle, allowing play to continue.

Tottenham goalkeeper Heurelho Gomes gathered the ball and assumed Spurs had been given a free-kick due to the handball, as he placed the ball down and took a few steps back.

But Nani simply stood over the ball and passed it into the net, taking advantage of Clattenburg's refusal to give a free-kick.