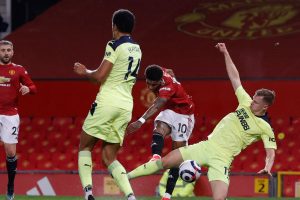 Despite a lacklustre performance, Manchester United defeated Newcastle 3-1 at Old Trafford, to leapfrog Leicester in the Premier League.

Allan Saint-Maximin had equalised for the visitors after Marcus Rashford opened the scoring, but Steve Bruce's side never looked like getting back into the game after Dan James put the Red Devils back ahead.

Solskjaer's side put in a lacklustre display, although the United boss had been forced to contend with the absences of several of his backroom staff due to a Covid-19 outbreak.

Here are five things you may have missed from the clash.

Butt back in the dugout

After a coronavirus outbreak among Ole Gunnar Solskjaer’s backroom staff, three members of his team were forced to sit out Sunday’s game.

That meant head of first-team development Nicky Butt and youth coach Mark Demsey were called up to the senior side to assist Solskjaer.

It marked a return to the Old Trafford dugout for Butt, who assisted Ryan Giggs during the Welshman’s interim spell in charge after David Moyes’ sacking.

Butt helped United pick up two wins and a draw from those four games in 2014 and continued his good run with the win over Newcastle.

After getting caught out by playing a deep defensive line for Everton’s equaliser two weeks’ ago, Harry Maguire attempted to get his team to play higher up the pitch at set pieces.

The United skipper could be heard shouting ‘out’ at corners, but the Red Devils remained vulnerable at the back.

In fact, it was from a corner that Newcastle netted their equaliser, with a short corner forcing United to drop deep and Saint-Maximin volleying in after a poor header from Maguire.

David De Gea has come under fire for his performances this season, with Dean Henderson pushing to be selected ahead of the struggling Spaniard.

And De Gea continued to look nervy at Old Trafford, with the 30-year-old forced to save himself after a poor punch in the fifth minute only got as far as Joelinton, whose half-volley De Gea tipped over.

His nervy start continued and six minutes later, De Gea sent a pass straight to Joelinton after 11 minutes, although United survived that attack.

Even more damning for De Gea is the fact that of the last seven shots United have faced from inside the box, they have conceded five goals.

With Richard Hartis and Craig Mawson both absent from Old Trafford, Solskjaer called upon fourth-choice keeper Lee Grant to act as goalkeeper coach.

Grant joined the Red Devils in 2018, although has not made an appearance in a United shirt.

Instead, he has been called upon to act as a mentor to his fellow goalkeepers, and perhaps made the first step towards his next career after retirement against Newcastle.

Solskjaer sent both Juan Mata and Mason Greenwood out to warm-up almost as soon as the second-half started.

Mata and Greenwood’s early stretch could have been a message from the United boss that his under-performing stars needed to step up in the second period.

That seemed to have the desired effect, with Dan James scoring United's crucial second goal 12 minutes after the break.