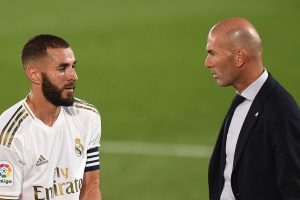 The appointment of Zinedine Zidane as Manchester United boss could bring with it a host of transfer opportunities for the Red Devils.

Zidane is one of the early frontrunners to replace Ole Gunnar Solskjaer at Old Trafford with the axe set to fall on the Norwegian after Saturday's dismal 4-1 defeat by Watford.

The former Real Madrid boss is understood to be among the candidates being considered by United chiefs, along with Ralf Rangnick, Erik ten Hag, Mauricio Pochettino and Brendan Rodgers.

The Glazer family have even told officials to accelerate attempts to bring him to the club.

As the only one of the candidates currently without a club, Zidane is an attractive option. And as Daily Star Sport discover, there's every chance he could bring a couple of friends with him to Old Trafford…

Do you think Zidane is the right man for United? Let us know your thoughts in the comments section below.

From Zlatan Ibrahimovic to Edinson Cavani, United love nothing more than an ageing centre-forward. It's not out of the question that Karim Benzema could join that list if Zidane gets the gig at Old Trafford.

Despite boasting one of the most impressive scoring records in the modern era, including 14 goals from 15 appearances this season alone, the Frenchman has long been linked with a move away from the Bernabeu.

It might be a long shot, but the 33-year-old excelled under Zidane before, has a prior relationship and understanding with Cristiano Ronaldo and is a cast iron guarantee of goals, regardless of age.

Add in that United are one of the few clubs who can afford the forward's wages, and it starts to make a lot of sense on a number of levels.

That said, the ongoing issues over United's pressing would be unlikely to be solved with Benzema and Ronaldo up top.

Dani Carvajal is arguably the most likely, or at least fitting, candidate for a Zidane reunion.

Despite lamping out £50million on Aaron Wan-Bissaka from Crystal Palace in 2019, United have constantly sought to add more depth at right-back, most notably with their pursuit of Kieran Trippier.

Should the former Real coach accept the Old Trafford job, it could see the club turn their attention from the Wanda to the Bernabeu.

The 29-year-old was strongly linked with a move to United in 2018 and would represent a smart first bit of business for Zidane if he does replace Solskjaer in the dugout.

As it stands, United are lacking genuine quality in two key areas – the dugout and the midfield engine room. Appointing Zidane could solve both of those issues in one fell swoop.

The Frenchman enjoyed a superb relationship with German midfielder Toni Kroos, who once described the 1998 World Cup winner as "the best coach you could ask for."

Kroos showed his passion for a challenge when he swapped Bayern Munich for Real Madrid in 2014, despite it being easier to sit tight at the Allianz Arena and continuing to hoover up medals.

Maybe Zidane will convince him to conquer the Premier League too before pulling up stumps on his impressive career.

Zidane and Isco didn't always enjoy the best of relationships at the Bernabeu, but the midfielder was still a hugely important player during Zizou's time at Real, making well over 100 appearances under the Frenchman.

Although United are well-stocked in attacking areas, Zidane will want to stamp his mark on the side. Signing Isco would allow him to do just that.

A similar age to Carvajal, the Spaniard has won it all at the Bernabeu and crucially is available for free next summer when his contract runs out. That should make him a very attractive option indeed.

One player who United have been linked with recently is Federico Valverde. According to Spanish publication El Nacional, the Red Devils are planning a £60million bid for the 23-year-old midfielder.

The Uruguayan was terrific under Zidane in the Spanish capital but has struggled in recent times with competition from the likes of Casemiro, Toni Kross, and Luka Modric.

United are said to want him as a replacement for Paul Pogba, and their chances of making a deal happen only stand to improve if Zidane is appointed in the coming days.

The 49-year-old gave the midfielder a glowing reference in 2019, saying he helped preserve Real's traditions of having the best players in the world.

"He is someone that is doing very well and that is the principle of this club, we’ve always had the best players," he told reporters.