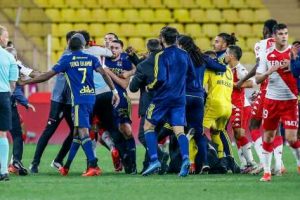 A mass brawl broke out – in the clash between Monaco and Lyon – after the full-time whistle, resulting in five red cards between the two sides.

Lyon's Mattia De Sciglio and Marcelo, alongside Monaco's Pietro Pellegri and Willem Geubbels, joined Lyon's Maxence Caqueret – who had already been given his marching orders – in seeing red during the fixture.

Tensions appeared to spill over after the game as players, and coaching staff, pushed and shoved each other in the centre circle.

Pellegri, Thiago Mendes and Wissam Ben Yedder all seemed to be at the heart of the conflict, and Pellegri had to be furiously dragged away by staff.

Emotions were high at the Stade Louis II, with both sides seeing the game as a must-win fixture to help boost their hopes of Champions League qualification.

Kevin Volland opened the scoring for Monaco – Lyon quickly turned the fixture on its head with goals from former Manchester United winger Memphis Depay and Marcelo.

However, a mistake from Lyon's keeper, Anthony Lopes, presented Ben Yedder with a chance to draw Monaco level and bag his 100th Ligue 1 goal.

And it wasn't enough to secure a point for Monaco: 17-year-old-sensation Rayan Cherki earned Lyon the win with a last-gasp-winner.

With only the top two in France gaining automatic spots in next seasons Champions League: both Monaco and Lyon have some ground to make up.

Monaco currently sit in third, four points off PSG in second, whilst Lyon are a spot behind in fourth – on course for a Europa League berth.