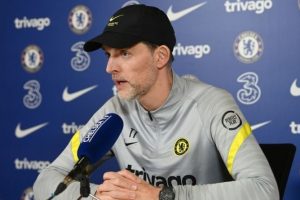 Chelsea appeared to have secured their final piece of the puzzle when they forked out £98million on Romelu Lukaku in the summer, but further questions have arisen at Stamford Bridge. Thomas Tuchel appears to be in the market for two new full backs after losing Ben Chilwell and Reece James to injury over the last month.

Chilwell is set to be out for the rest of the season, while his England colleague James is predicted to be out for as long as six weeks.

Marcos Alonso is the Blues’ only fit and firing natural wing-back, and Tuchel has been forced to compensate for their absence by deploying the likes of Saul Niguez, Callum Hudson-Odoi and Christian Pulisic in the wide areas.

It is a far from ideal situation for the former Paris Saint-Germain and Borussia Dortmund manager, who has seen Chelsea’s title challenge dissipate in the winter cold.

And with the January transfer window wheels firmly in motion, Express Sport considers five players Chelsea could potentially sign in the window.

JUST IN: Arsenal board in agreement on enormous ‘£150m sum’ needed to sign to Dusan Vlahovic now

The Barcelona defender was one of the most exciting and talented prospects when he joined the Catalans from Ajax.

However, Daniel Alves’s surprise return to the club has seen the United States tumble down the pecking order in Xavi’s side.

The Blaugrana are still looking to make space on their hefty wage bill, therefore; a Blues move for the 21-year-old could be a win-win-win for all parties.

Transfermarkt values the right-back, who is also capable of playing at left-back, at around £16m, but Barcelona would most likely want to recoup the £23.8m they paid for the defender in 2020.

The speedster is one of the most exciting defenders in Europe, having starred in Stefano Pioli’s side’s title chase this season.

It is claimed a bid of around €60m (£50m) would perhaps tempt the Serie A giants into selling.

However, he would be a very hefty purchase for the Blues, who only signed Ben Chilwell for a similar figure in the 2020 summer transfer window.

The French midfielder’s combatting and classy performances in Monaco and France’s central midfield, have garnered plenty of interest from around Europe.

Tchouameni has been earmarked as a cheaper alternative to West Ham star Declan Rice, who would likely command a fee of no less than £100m.

N’Golo Kante and Mateo Kovacic’s repeated injury problems this season has resulted in Tuchel’s midfield selections being rather inconsistent this season.

And the Blues could even look to the Nations League winner in the January transfer window to bolster their midfield.

Attila Szalai is a defender who has almost flown under the radar this season, but the Hungarian is amassing quite the reputation.

The 23-year-old has enjoyed another excellent season with Turkish giants Fenerbahce and would likely be a much cheaper alternative to other options.

In fact, his international team manager Paolo Rossi even went as far to say that a move to the Blues was even a done deal.

“Clearly, he has been followed by important clubs in Spain, but apparently his move to Chelsea is a done deal,” Rossi surprisingly said to Calciomercato in December.

A move to Stamford Bridge collapsed in the dying stages for the French international, and the Blues may very well try their luck again in January.

Chelsea were so confident a move for the Sevilla star was completed, they allowed Kurt Zouma to join West Ham in a bid to generate some extra cash.

And there is every possibility the Blues could try their luck with the Sevilla defender, who has a reported £68.5m buy-out clause at Julen Lopetegui’s side.

Blues defender Antonio Rudiger still looks likely to depart the club at the end of the season for nothing, while the contract situations of Cesar Azpilicueta and Andrea Christensen appear no closer to being solved.