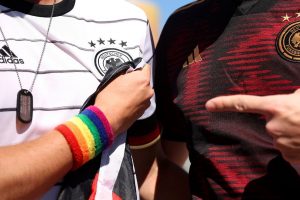 FIFA have reportedly performed a swift U-turn on the rainbow flag which will now no longer be prohibited at Qatar’s eight World Cup stadiums from the next round of matches. The host nation are now alleged to have provided FIFA with assurances that supporters can enter stadiums wearing rainbow colours following a tense opening week that eventually saw football’s governing body ban the OneLove captain’s armband.

Seven nations were set to wear the political symbol of inclusion and diversity before FIFA threatened captains with a one-match ban – backing the countries into a corner.

Now The Independent are reporting that fans will be able to wear rainbow-themed clothing from the next round of group matches after a dramatic swing of the pendulum.

Large numbers of supporters at the tournament have already had items confiscated on their way into the stadiums – including bucket hats, flag and t-shirts.

But now it’s understood that there will be leniency moving forward – despite Qatar’s strict laws surrounding homosexuality.

Fans, players and managers have been keen to make gestures in support of the LGBTQ+ community on the biggest stage of all.

FIFA are now said to have received assurances from the tournament’s Safety and Security Operations Committee that rainbow items will no longer be confiscated in a major boost for supporters looking to make a statement.

Meanwhile, Germany have been told they will not face punishment after they posed with their hands over their mouths during their official team photo before their 2-1 defeat to Japan on Wednesday.

The gesture was carried out in protest against FIFA’s decision to ban the OneLove armband prior to England’s World Cup opener against Iran.

Germany’s Football Association tweeted the following statement: “With our captain’s armband, we wanted to set an example for values that we live in the national team: Diversity and mutual respect. Being loud together with other nations.”

“Human rights are not negotiable,” the statement added, and “denying us the armband is like denying us a voice. We stand by our position.”

In light of the events, Everton winger Andros Townsend – who is working as a pundit for ITV and talkSPORT in Qatar – declared he felt uneasy with people “protesting and upsetting a culture.”

He told talkSPORT: “It’s a difficult conversation. I played with a lot of Muslim players and my understanding is gay marriage is outlawed based on religious beliefs.

“If I go back to Rainbow Laces, the Muslim players respect that but can’t promote it as they fear they are going against their religion and ultimately they are going to go to hell. It’s difficult.

“I’m a bit uneasy we’re coming in here, protesting and upsetting a culture when these guys are in their own country minding their business.”