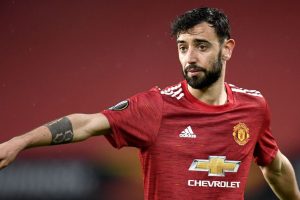 Bruno Fernandes is producing what Manchester United feared when they first scouted him at Sporting Lisbon.

The Red Devils have benefitted from the Portugal international, who has been in blistering form since his arrival in January 2020.

He has missed just two matches all season and has scored 26 times and assisted 16.

In total, Fernandes has 38 goals in 74 appearances with 24 assists as well.

Ole Gunnar Solskjaer is hugely dependant on the midfielder but there are signs he is starting show one deficiency he had at Sporting.

One attribute that was noticed by United scouts was the number of times he lost possession through his all-out attack methods.

Even when it appears nothing is on, Fernandes will move the ball forward more times than not in a bid to kickstart an effort on goal.

Over his United career, it has largely worked and has contributed to many of their goals – hence the swelling stats.

But in recent outings, the balls sprayed forward have proved awry, something evident from his time at Sporting.

However, will this worry Solskjaer? Of course not.

This is just one facet of the player the Red Devils coach relies on and will be happy to see him try rather than withdraw and move the ball sideways.

“Passion, creativity and a winning mentality,” Solskjaer told FourFourTwo when asked what Fernandes brings to the squad.

“Once in a while he can bring a sulk, which sometimes you need. He brings a lot to this team, which is what we wanted from him when we signed him.

“Whenever he starts, he doesn’t stay out [late after training].

“He’s never happy with me when I tell him to go inside.

"But he knew he wasn’t starting [this game], so he stayed out practising free-kicks for 45 minutes… and it worked.”