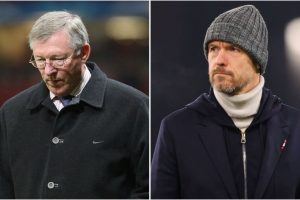 Sir Alex Ferguson is without doubt the greatest manager in Manchester United’s history, but his transfer dealings didn’t always lead to success. New boss Erik ten Hag will be keen to avoid any such disasters and the Dutchman can look back at 10 moves in particular as a lesson in what not to do…

The Uruguayan was prolific just about everywhere he went in his career, with the exception of Old Trafford. Signed for £7.5million as a youngster from Independiente, Forlan scored 17 goals in 98 matches for the Red Devils and fled to Villarreal in 2004.

United thought they had got their hands on a tricky wonderkid when they signed Zaha from Crystal Palace in 2013. Two Premier League appearances and three loan spells during his brief stint suggests that Ferguson got this one wrong, and the Ivory Coast international had to return to Palace before rediscovering his best form.

JUST IN: Tottenham hero admits surprise at signing that Conte ‘does not want’

Acquired for £28m – a British transfer record at the time – Veron is largely held to have disappointed at Old Trafford following a move from Italian giants Lazio. He only lasted two seasons before eventually moving on to Chelsea, where he also underwhelmed with just seven Premier League appearances in his one campaign at Stamford Bridge.

The skilful winger was seen by some as the heir to Cristiano Ronaldo’s throne when he signed in 2009, but things certainly didn’t work out that way. A measly total of 14 goalless Premier League appearances saw Obertan shipped out in 2011, before going on to play for the likes of Levski Sofia and Charlotte Independence.

Signed as a youngster from Nantes in 2003, Djemba-Djemba was branded ‘a Man Utd player in every sense’ by Ferguson at the time. He did stick around for two years but failed to make the grade with the Red Devils, going on to put together a journeyman career with the likes of Hapoel Tel Aviv and St Mirren.

A high-quality player on his day, it came as a blow to United fans that Hargreaves’ days didn’t come around often enough. Injuries blighted the £17m midfielder’s stint at Old Trafford and he made just 27 Premier League appearances in four years, scoring twice.

Signed from obscurity in 2010, Bebe came in as an unusual prospect as a 6ft 3in winger with limited experience. Ferguson claims that he signed him on the advice of former assistant Carlos Quieroz, but the move didn’t work out as the Portuguese-born player moved on in 2014 after two league appearances, before forging a respectable career with Rayo Vallecano.

United had a tough time replacing Peter Schmeichel and Taibi was possibly the worst of several attempts to offset the Dane’s departure. The Italian conceded 11 goals in four matches and committed one of the most recognisable howlers of the Premier League era, allowing Matt Le Tissier’s shot to squirm through his legs and into the net.

Signed in the same summer as Ronaldo, the Brazilian came to United’s attention after his exploits at the 2002 World Cup. Kleberson quickly picked up an injury and struggled to get his stint at Old Trafford out of second gear, however, as he was sold on to Besiktas after two years.

Snapped up as a 25-year-old with a solid but unspectacular goal-scoring record for Angolan side Petro Atletico, it’s no particular surprise that Manucho didn’t hit any lofty heights with United. The striker was sold on after just a year and a solitary Premier League appearance.