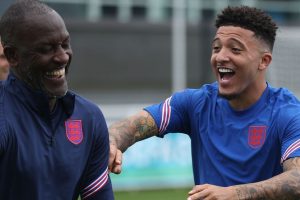 Jadon Sancho’s links with Manchester United put him at the centre of one of the biggest transfer sagas this summer, and Old Trafford icon Rio Ferdinand expects the move to be completed any day now.

The Red Devils failed to get a deal over the line despite strong ties to the Borussia Dortmund ace this time last year, but Sancho is now understood to have agreed personal terms over a move.

United are still yet to satisfy Dortmund’s desires regarding their compensation, though this is the closest the player has looked in returning to his native England.

Ferdinand, 42, answered his followers’ questions during a Twitter Q&A on Monday and was resoundingly hopeful when asked if he expected Sancho to complete the move ‘imminently’:

The United great even tagged Sancho in his reply, which read: “Yes… just driving to Manchester now to get it done! Come on.”

Ferdinand’s affection for the winger is clear for all to see, hopeful his old team-mate, Ole Gunnar Solskjaer, finally lands his target this summer.

Sancho will have felt frustrated to have missed out on England’s 23-man squad when the Three Lions opened their Euro 2020 account with a 1-0 victory over Croatia on Sunday.

Do you think Manchester United will finally sign Jadon Sancho this summer? Let us know in the comments section. The 21-year-old is coming off the back of a campaign in which he scored 16 goals and recorded 20 assists in all competitions for Dortmund.

Speaking ahead of England’s win at Wembley, manager Gareth Southgate said: “That was our front six in our games in March and we had some continuity from those games.

"They have an understanding and they have fabulous depth. We know Marcus Rashford and Jack Grealish are really pushing for starting positions this is going to be a game where substitutes are more important than ever.

"We're very focused on today's game and prepared tactically for the game. We know everyone around is hugely excited and the players are as well. We have to focus on the performance and put the other noise aside us to one side."

Manchester City academy graduate Sancho left the Etihad Stadium for Germany in 2017, establishing himself as one of the Bundesliga outfit’s most valuable assets over the past three seasons.

United recently a saw a £67million offer for the player turned down as Dortmund seek another £10m up front, with talks between the two teams ongoing.

The Premier League giants will have to bump up their bid if they are to bring Sancho back to England in 2021, with Ferdinand eager to help the transfer along any way he can.