Ferdinand and Gerrard agree on Mudryk after making Chelsea debut 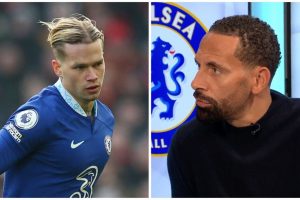 Rio Ferdinand and Steven Gerrard both hailed the impact of Chelsea new boy Mykhaylo Mudryk after the £88million signing made his debut against Liverpool on Saturday. The Ukrainian starlet began the match on the bench after his move from Shakhtar Donetsk but made an immediate impression with an impressive cameo in the goalless draw at Anfield.

The 22-year-old was brought on for Lewis Hall in the second half as Graham Potter went for all three points and Mudryk went close to opening his Chelsea account on two occasions. First, he slalomed in between two Liverpool defenders before shooting into the side netting, and then a heavy touch denied him a tap-in at the far post later on.

His 35-minute display was enough to give Blues fans some encouragement for what the future may hold for the winger after stealing him from under the noses of Arsenal last week, despite the fact Mudryk had not played a competitive match since November 23.

And both Ferdinand and Gerrard, working the game as pundits in the BT Sport studio, were taken aback by his ability on show on Merseyside, backing him to prove Arsenal were wrong not to sign him.

“We’ve all seen clips of his explosive pace, but I saw someone there with soft feet today,” Ferdinand said on BT Sport after the match.

“Someone who’s got a good weight of pass, good decision-making in the final third, the calmness running at speed – those elements there make it a frightening proposition running at a full-back when he gets into full flow.

“These are only his first minutes in a month or so, so who knows what he’s going to be producing after this. It’s an exciting moment for Chelsea fans and I’m sure there will be Arsenal fans sitting there going ‘oh my days, how did we let this one go?’.”

Liverpool hero Gerrard was in full agreement about the potential the Ukraine international has in his locker and said his performance was reminiscent of former Blues star Arjen Robben, who was known for terrorising defenders with his slick dribbling and pace.

“I would be really excited about the new kid, Mudryk, if I was a Chelsea fan going away,” Gerrard added.

“I thought that was a strong cameo, and if he’s not fit and there’s more to come in that department then I know Chelsea fans will be really excited.

“He looks the real deal, some of his clips today were outstanding. He reminded me a little bit of Arjen Robben here today, his footwork, how quick he is, how he manipulates the ball, I would be very excited if I was Chelsea.”