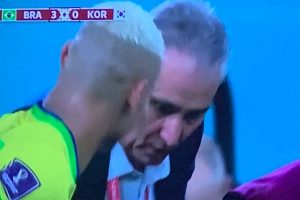 The five-time winners raced into a 4-0 lead before half-time in Monday night's round of 16 tie, with Vinicius Jr opening the scoring after just seven minutes. His goal was followed by a choreographed set of dance moves from the players, which they then recreated after each subsequent goal.

They even ran to the touchline to get manager Tite in on the act after Richarlison made it 3-0, causing rival supporters to call for the Selecao to be kicked out the tournament as a punishment.

One fan tweeted: “Great goal but the dad dancing can f*** right off.” Another added: “Am I the only one irritated by Brazil dancing like they won the WC when they score against South Korea?”

A third supporter also wrote: “Nah Brazil dancing in the 7th is a mockery. Should show a bit of respect to your opponents imo.”

Another commented: “Why is this Brazil team dancing after every goal, it is still round of 16 na.” One more went on to add: “Brazil should be disqualified for that celebration alone.”

What has been the best celebration at the 2022 World Cup? Let us know in the comments section below.

Vinicius Jr's opener was soon followed by a second from the returning Neymar, who left opposition goalkeeper Kim Seung-gyu motionless with his cheeky penalty.

Richarlison then finished a fine team move to grab a third goal before the half-hour mark. West Ham United midfielder later got in on the act to volley his side into a 4-0 lead.

South Korea's defensive woes continued for the rest of the half but Brazil were unable to grab a fifth goal despite creating several promising openings.

The winners of the tie will face Croatia in the last eight on Friday, with a place in the semi-finals at stake. Croatia booked their place earlier on Monday by beating Japan on penalties.

Brazil are aiming to extend their tally of World Cup victories to six in Qatar by lifting the trophy for the first time since 2002.