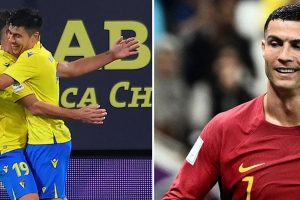 United shipped two early goals to the Spanish side, but Erik ten Hag's side were able to claw themselves back in the second half. However, the Red Devils were hapless as Cadiz restored their 4-2 advantage in the final minutes.

And United fans have slammed their side's performance online. However, they also had to put up with rival fans – who were quick to poke fun at the Red Devils in their first post-Ronaldo fixture.

One fan joked: "Manchester United lost against Cadiz lol there are some who will still say it's because of Cristiano Ronaldo!"

"Manchester United deserve this downfall because of how they treated their player in history," a second added. And a third said: "This shouldn’t be the Ten Hag ball we were promised right?"

What do you think of United losing their first game without Ronaldo? Let us know in the comments section

However, the Dutchman wasn't so positive about the Red Devis' performance: “We are unhappy with this game. Of course, you always have some positives even when you lose, but today there are more negatives.”