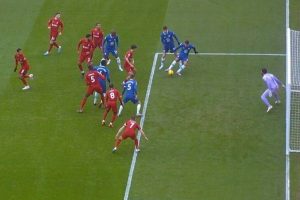 Fans were left raging after Kai Havertz's early goal for Chelsea against Liverpool was ruled out by VAR.

Havertz hit the net after three minutes from a corner following some sloppy defending from Liverpool at Anfield. Thiago Silva hit the post initially and Havertz was on call to thump home the ball on the second attempt.

But the strike was ruled out as the German was deemed to be offside by VAR, although he appeared to be onside when scoring, leading to an outcry of anger from Chelsea fans who insisted Havertz was behind Silva.

The Blues faithful flocked to Twitter to share their fury at the decision that kept the scores equal. One fan raged: "That is the most egregious use of VAR I’ve ever seen – how has that been disallowed when Havertz is behind Thiago silva."

Will Chelsea finish higher in the Premier League than Liverpool? Let us know in the comments section below A third called for the goal analysis technology to be scrapped, and said: "How was that offside? When Thiago shot the ball, Havertz was behind him. Boycott VAR."

Replays did appear to show Havertz's foot just ahead of the ball, despite being behind Silva, though it's the second controversial VAR decision that's aided Liverpool in recent weeks, following the system ruling out Wolves' winner against the Reds when Toti Gomes' last-minute winner was ruled offside as no camera angles were covering the goal. And fans referenced the situation to show how the system has conveniently favoured Liverpool, with one fan saying: "VAR of course conveniently turned on at Anfield this time. Guessing they had the right camera angle this time."

Then another user quipped: "It wouldn't be Liverpool vs Chelsea if VAR didn't rule out our goals." Both sides are in desperate need of a win as they battle to try and get into the race for European football after a poor Premier League campaign so far.