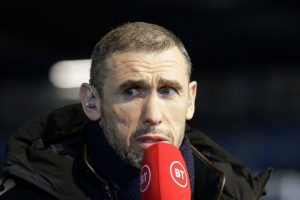 The former Arsenal man received pelters for his pronunciation of former Stoke man Eric Choupo-Moting, with one likening Keown's attempts to that of a commentator on Pro Evolution Soccer.

Choupo-Moting scored Bayern's first goal in a topsy-turvy contest that swung the way of PSG thanks to a brace from Kylian Mbappe and a first-half goal from Marquinhos.

PSG won the match 3-2 to take a significant advantage into the second-leg, but during the match it was Keown's commentary that was receiving attention on social media.

One wrote: "How many ways can Martin Keown pronounce Choupo-Moting in one game? Chopper-Moting personal favourite so far."

While a third chimed with an extra subtle dig: "Martin Keown is having an absolute SHOCKER with these player names… Jesum Crust."

Keown has less than a week to brush up on his pronunciation, with the second-leg between PSG and Bayern pencilled in for Parc des Princes on Tuesday 13th April.