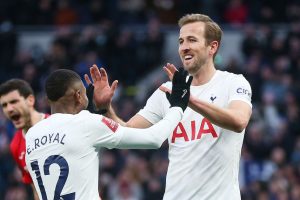 Tottenham needed Harry Kane to get past League OneMorecambe in the third round of the FA Cup – and duly took a battering on social media as a result.

Antonio Conte has presided over an upturn in form since his appointment as Spurs manager at the start of November.

But things threatened to go horribly pear – or should that be shrimp-shaped – for the Italian against Morecambe on Sunday.

Conte named a strong side for the clash against the third-tier relegation candidates, with Dele Alli, Tanguy Ndombele and Giovani Lo Celso all among the starters.

But it was the visitors who took the lead as Irishman Anthony O'Connor tapped home from a corner to send the Morecambe fans up the other end delirious.

While Tottenham plugged away for an equaliser, there were chants of "Premier League, you're having a laugh" from the away end, as the visiting fans made the most of their day out.

It remained 1-0 for over 30 minutes until Conte summoned the cavalry, bringing on Kane, Lucas Moura and Oliver Skipp to finally deal with the dogged Shrimps once and for all.

Harry Winks got the hosts back on level terms before goals in the final ten minutes from Kane and Moura ended Morecambe's brave resistance and spared Tottenham blushes.

Can Spurs win the FA Cup this season? Let us know in the comments section.

Spurs may have advanced through to the fourth round, but they still received pelters on social media after struggling to get past a side 59 places below them in the league leader.

One Tottenham fan said: "Really shouldn’t need the likes of Lucas and Kane to bail us out against a team that have conceded 49 goals in League 1 hoping it’s last time we see a few of our players in a Spurs shirt.."

While a neutral supporter added: "Embarrassing when you need to bring Kane, Lucas & Skipp on to beat Morecombe."

Someone else commented: "Tottenham need to bring on Kane to beat morecambe."

"The fact we need Kane and moura to even be considered to be brought on is absolutely disgusting #TOTMOR #coys #thfc #spurs #FACup," bemoaned another frustrated Spurs fan.