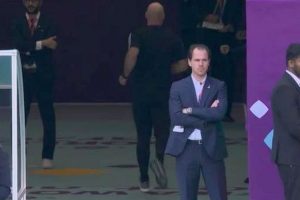 Fans are convinced Wales boss Rob Page jetted off for a poo during his side's shock 2-0 defeat to Iran in the World Cup.

As the game approached the end of normal time, Page was spotted darting down the tunnel for a brief moment. And supporters were adamant that the Welsh manager left his dugout to spill his guts on the toilet.

One fan blamed Page's alleged bad stomach on the food in Qatar, and commented: "Rob Page got the Qatar belly? Running for a sxxt? A second user reiterated the same stance and mused: "Rob Page has 100% gone for a poo".

But another fan quipped that Page's absence was the best strategy he deployed in the game, and said: "Rob Page running down the tunnel has been the best tactical move he's made all game." And a fourth fan thinks the 48-year-old dashed out of sight to get away from Wales' shambolic performance.

Iran had Wales on the ropes for most of the match, and when Page emerged from the tunnel again, things went from bad to worse for his team. First, the Dragons lost Wayne Hennessy who was sent off in the 86th minute following a horror challenge, and then, Iran struck a quick-fire double in the final moments of stoppage time to deal the Welsh's chances of qualification a huge blow.

What do you think is the reason for Rob Page's impromptu dash down the tunnel? Let us know in the comments section below

Rouzbeh Cheshmi bagged Iran's first goal in the 99th minute, and Ramin Rezaeian put the game to bed two minutes later. Wales' loss leaves them needing nothing less than three points against England in their final game to have any chance of climbing out of their group.

Gareth Bale's claim that Wales have more passion than England would be put to the test. Although, former Three Lions boss Sven-Goran Erkisson insists Bale's got it wrong, and England actually possess the most pride out of the British neighbors.