Home » Soccer » FA CUP DRAW LIVE: Find out who your team will face in fourth round

FA CUP DRAW LIVE: Find out who your team will face in fourth round 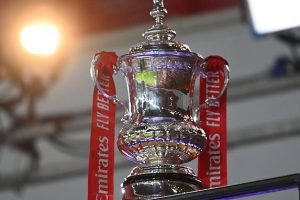 FA CUP DRAW LIVE: Everything you need to know as the big guns and giant killers go into the hat for the fourth AND fifth-round draw tonight

The FA Cup will have a double draw on Monday night with the teams left in the tournament finding out who they will face in the fourth round and also their potential fifth-round opponents.

Two games are still to be played to complete the third round – West Ham’s visit to Stockport takes place after the draw while Southampton against Shrewsbury was postponed at the weekend.

Manchester City, Liverpool, Man United, Chelsea, Tottenham and Arsenal are among teams to progress to the fourth round with the likes of non-League Chorley and League Two Crawley also marching on after impressive wins.

Here’s everything you need to know ahead of the FA Cup draw including the all-important ball numbers.

Follow Sportsmail for live FA Cup coverage as you discover who your team will face in the fourth and fifth round of the competition from 6:30pm GMT TODAY.

What time is the draw?

It all kicks off on Monday, January 11 with the fourth-round draw starting at 7:10pm GMT followed by the fifth-round draw at 7:23pm GMT.

When is the fourth and fifth round played?

The fourth-round fixtures will take place over the weekend beginning January 23 and the fifth round ties will be held midweek of the week commencing February 8.