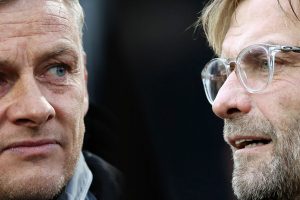 Manchester United will take on Liverpool in the FA Cup fourth round.

The Premier League top two have been handed a mouth-watering tie after emerging from the third round over the weekend.

Non-league Chorley have been rewarded for their heroics with a home tie against Premier League opposition Wolves.

Arsenal will head to either Southampton or Shrewsbury Town in the fourth round with Cheltenham Town hosting Manchester City.

Ties will be played across the weekend of January 23/24 whilst the draw for the fifth round has also taken place.

The winners of Manchester United vs Liverpool will face Stockport, West Ham or Doncaster Rovers.

The path to Wembley is much clearer for all remaining teams – the FA Cup fourth and fifth round draws in full are below.