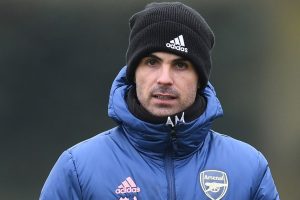 Arsenal will look to record back-to-back Premier League wins when they go away to Burnley in Saturday’s lunchtime kick-off.

Mikel Arteta’s men registered one of their most impressive victories of the season last weekend, running out 3-1 winners away at top-four hopefuls Leicester.

Before that they also came from behind to beat Benfica 4-3 on aggregate in the last-32 of the Europa League.

Arteta will hope to build on those wins and gain revenge on Burnley, who handed them a gut-wrenching 1-0 defeat at The Emirates earlier in the campaign.

But who will he choose to start the game on Saturday?

The German is Arteta’s No.1 goalkeeper and is almost certain to get the nod in between the sticks at Turf Moor, where he will look to record a first clean sheet in six games.

Backup goalkeeper Runar Alex Runarsson has also been cleared to return the squad after recovering from a knee problem.

While he has come under fire for some of his performances of late, Bellerin has been an ever-present in the Arsenal side this season and is likely to earn another start here.

The centre-back is fit and training again after suffering a concussion in last month’s 1-0 defeat at home to Manchester City, meaning he will hope to come back into the starting XI at Burnley.

After being preferred to Gabriel in the Gunners’ previous two outings, Mari is expected to play alongside Holding at the heart of Arsenal’s backline.

The Scotland left-back has been one of Arteta’s most consistent performers this season and is a banker to start every match if fit.

Partey has slowly been returning to full fitness after sustaining yet another injury last month, but after coming off the bench in recent outings he could be deemed fit enough to start here.

Another standout player for the Gunners this season, Xhaka is a pivotal member of Arteta’s midfield and is certain to be deployed alongside Partey in a midfield pivot.

Emile Smith Rowe is an injury doubt heading into this game after being taken off at half-time against Leicester with a hip problem, so the Real Madrid loanee could slot back into the No.10 role at Turf Moor on Saturday.

Saka has been Arsenal’s player of the season so far, registering six goals and seven assists, and will be positioned on the right flank against Burnley.

While he has drawn plenty of criticism since moving to The Emirates and is yet to score a goal, the former Chelsea man set up two goals in last Sunday’s win at Leicester and could be given the chance to keep his momentum going on the left.

Aubameyang will be on the hunt for his first goal in three matches at Burnley, where he is expected to be leading the line.