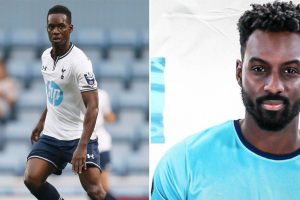 A former Tottenham forward has marked his return to football after a three-year absence with a goal.

Simon Dawkins, 34, is still going strong despite launching his professional career way back in 2005 with the north London club. The wide-man first broke onto the scene with Spurs as a teenager in 2004, spending one year in the academy before being integrated into the reserves.

But after calling time on a 14-year career which didn’t quite deliver on his full potential in English football, Dawkins has stunningly returned to the scene in the second tier of American soccer with USL side Monterey Bay.

READ MORE: Tottenham have 'preference' of club to sell Harry Kane to if they make transfer U-turn

The Edgware-born winger was unable to cement his place in the Tottenham team of the mid-Noughties. He featured in the first team matchday squad just once under Martin Jol, appearing as an unused substitute in a UEFA Cup match against Cypriot side Anorthosis Famagusta during the 2007/08 season.

Leyton Orient offered the youngster an opportunity to make a mark before the start of the 2008/09 campaign, but an ankle injury while playing against parent club Tottenham marred his progress. Dawkins made 14 appearances for the east London side but was unable to score a single goal as his loan ended that January.

A period of uncertainty followed as Dawkins was released from Spurs in the summer of 2009 upon the end of his contract. But a failed medical with French side Strasbourg saw him soon return to Tottenham on a non-contract basis while recovering from injury.

And after another set-back while on trial with Celtic, his performances in training and a friendly saw him rewarded with a new two-year deal in March 2011. While he never actually went on to feature at White Hart Lane, the following two years would be crucial in his development.

Dawkins made his first major mark as a footballer on loan at San Jose Earthquakes in the MLS during the 2011 season, where he netted six goals in 26 appearances. After returning and appearing in his first Spurs matchday squad in over four years, he enjoyed another fruitful 2012 season with the MLS side where he notched another eight goals.

An unspectacular loan to Aston Villa was then followed by another temporary move to Derby County in the Championship under Steve McClaren. There, he grew in importance under the former England manager, and his stellar form saw the Rams secure him as a permanent signing in the second-half of the 2013/14 campaign.

Do you remember Simon Dawkins at Tottenham? Let us know in the comments section below

Unfortunately, the following season would be the pinnacle of Dawkins’ English football career with 42 appearances across all competitions, before a 2016 MLS move saw him return to California with San Jose. He notched another five goals across two years in America before having his contract brutally terminated a week before the start of the 2018 season.

A brief spell with Ipswich followed for the 21-times capped Jamaican international, but the 2018/19 campaign would prove equally difficult for opportunities to come by as he was released having made just two sub appearances. That looked to be it for the former Spurs hopeful as he began a long absence from the game.

That’s until USL Championship side Monterey Bay came calling in March 2022 in a move which saw him reunited with his former San Jose manager Frank Yallop. And the re-invigorated veteran has once again begun to showcase his abilities, scoring against New York Red Bulls II in the USLC on July 23 and making 12 further appearances.

While we have no idea what the future holds for a 34-year-old Dawkins, we cannot help but admire his persistence, still forging a career after facing so many knockbacks in his long journeyman career.