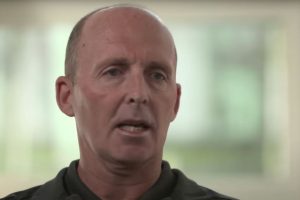 Former Premier League referee Mike Dean said he would have “taken the hit” by not booking Sergio Aguero for removing his shirt, had he been carrying a yellow card after scoring Manchester City’s iconic Premier League clinching goal.

While Agueroooo was the man at the heart of that historic game against Queens Park Rangers, Dean was the one in the middle brandishing the cards and making the calls. In fact, he even sent Joey Barton for an early shower after a clash with Carlos Tevez resulted in the former Newcastle United man being given a straight red card.

Exactly 40 minutes later, Aguero dinked his way past the defenders and fired in the 94th minute strike that gave City their first league title in 44 years. But while Dean did give the Argentine a yellow card for taking his shirt off in celebration, he said he would not have done so if Aguero had already been booked in the game.

“Yeah, unfortunately yeah, but it’s got to be done,” Dean said to the BBC Football Daily Podcast when he was reminded about the yellow card he gave to Aguero. When asked if he would have administered a second yellow card and thus a red card, Dean said: “I would have taken the hit. I would have totally not done it.

“I would have taken it off the boss. If they asked me ‘why didn’t you do it’ I would have just said ‘bigger picture’. Plus it was 90 plus whatever, but that didn’t happen.

“I did City a few years later when Sterling jumped into the crowd and he was already on a yellow, so I gave him the second one. It’s all about managing at the right time."

Will you miss seeing Mike Dean strutting his stuff in the Premier League? Let us know in the comments section below

Dean gave the England international a second yellow card after he jumped into the crowd after scoring a 97th minute winner against Bournemouth in the 2017-18 Premier League campaign. It was a decision which caused great controversy and frustration, as many believed Sterling should have been given some slack.

However, Dean will not have to listen to his critics for much longer, as he announced his retirement from refereeing in April after 22 years in the top flight. And when asked what his favourite ever match to referee was, there was only one clear winner.

“Yeah, Manchester City vs QPR, 100 per cent,” Dean added. “Bear in mind what was at stake, I don’t think it will ever happen again. A team winning on goal difference scoring with the last kick of the game.”