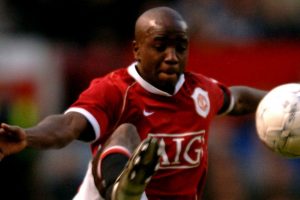 A former Manchester United youngster has built a successful career in business after quitting professional football at the age of 28.

Febian Brandy joined United when he was just eight-years-old and went on to play alongside the likes of Gerard Pique, Danny Drinkwater, Fabio and Rafael Da Silva and Tom Cleverley in the club's youth academy.

Despite being scouted by Barcelona at one point, Brandy failed to make the cut at Old Trafford and left in 2010 without making a single appearance for the club.

Over the next seven years he played for eight different teams – including one in Thailand – but decided to informally hang up his boots in 2018 to focus on a new football app he'd created.

The app – Skouted – is like a football version of LinkedIn, where players submit video footage of themselves in order to secure trials. It was initially aimed at giving professionals a second-chance in the game, but has morphed into a multi-purpose football employment network.

Skouted has roughly 10,000 users globally across 82 countries, countless players going on trial in the UK and abroad, and Brandy has even been in talks with the renowned Johan Cruyff institute in Barcelona about forging a business relationship.

Brandy explained that his experience at Man United inspired him to create a landscape where young footballers who don't make it at the top aren't simply forgotten about.

"But their parent or guardian didn’t have the connections to get them into that team and they might fall out of love with football.

"This was happening year after year. When I was around 28, I thought I need to create a platform so players can stay in the shop window and stay in love with football.

"In my career I’ve had scenarios where football clubs say they need to see some video footage and I might not have had it. It kind of makes it harder.

"Skouted, it doesn’t say a club will sign a player from seeing a little clip, but it just gives the club a little indication of what type of player they are going to be getting."

Who is the most talented Man United youth player never to make it at the club? Let us know in the comments below…

Players as young as three are able to upload video footage of them playing and get selected for Skouted trial events – though parental guidance is required for anyone under the age of 18.

Scouts can also use the app by requesting to see specific players in action, or players with specific attributes or highlights.

Players have been flown across the world for trials thanks to Skouted, and Brandy says he feels like a "proud dad" whenever someone lands a contract through his app.

"There are a few people working with me but it’s more like a one-man band at the moment so I need to be on point with everything," Brandy added.

"My sleep pattern is a bit crazy. It’s literally from morning to night really, responding to players, scouts and to parents. It takes up a lot of my time but it’s worth it.

"Let’s say if a scout is travelling from Manchester to Scotland to look at one player, they can probably look at 300 players in the journey time on the Skouted app.

"Players are kind of putting themselves in the shop-window 24/7. It’s still not where I want it to be but everywhere has to start from somewhere."