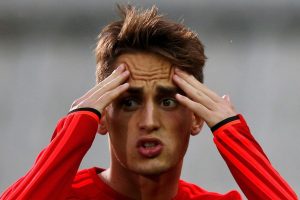 Joyce, who is the current Salford boss, was a United reserve team coach when the Belgian forward was coming through the ranks at Old Trafford.

At first there was a lot of hope that Januzaj could develop into something of a world-beater at United, after Sir Alex Ferguson gave him a taste of first team football.

But it wasn't long before he started slipping down the ranks, and upon David Moyes, Louis van Gaal and later Jose Mourinho taking the reins, Januzaj was eventually phased out.

Joyce said of Januzaj: "The frustrating thing is seeing ones like Januzaj get up to that level and stop doing the work they did to get them to that level.

"Not play the games, not train as hard, sit in Jacuzzis and not do the same weights and sessions they did to get there.

"Those are the frustrating ones for me, because that could be avoided."

After loan spells with Dortmund and Sunderland, in which Januzaj failed to impress in the Premier League under Moyes, the Belgian was sent packing to Real Sociedad in 2017.

Three years on and the 26-year-old is a mainstay in Imanol Alguacil's Sociedad side.