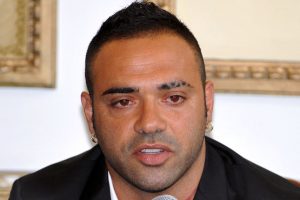 Former Juventus and Palermo star Fabrizio Miccoli has reportedly lost his appeal after being sentenced to three-and-a-half years in prison over a Mafia extortion racket.

Miccoli, 42, first received the sentence back in January 2020 after being accused of turning to Mauro Lauricella, the son of well-known Mafia boss Antonino, in the Kalsa district of Palermo to help recover a five-figure debt.

The ex-Italy international allegedly tried to help a friend who was owed €20,000 (£17,000) amid a dispute with a businessman from Sicily, which was said to have come from the sale of a nightclub in Isola delle Femmine.

He is said to have turned to Lauricella to help claim the money, earning him a charge of extortion, and his case wasn't exactly helped when investigators recorded a conversation in which he insulted anti-Mafia judge Giovanni Falcone.

Miccoli's lawyers still decided to appeal the sentence when it was made in January of last year, but Sky Sport Italia claim that has now been rejected.

The Supreme Court are understood to have turned down the appeal as the 'aggravating circumstance of the mafia method excludes any possible benefit in favour of the former footballer'.

Miccoli, who scored 103 goals in 259 Serie A appearances for Perugia, Juventus, Fiorentina and Palermo, will therefore begin his jail sentence of three years and six months.

The former striker is best known in Italy for his six-year stint with Palermo, where he scored 81 goals in 179 appearances.

Before heading to Stadio Renzo Barbera in 2007, he enjoyed brief spells with fellow Serie A clubs Perugia, Juve and Fiorentina, while also spending two years out on loan in Portugal with Benfica.

After departing Palermo, Miccoli played in Italy's third tier with Lecce and later brought the curtain down on his career in Malta with Birkirkara.

The Nardo-born ace, who officially hung up his boots in 2015, also earned 10 caps for his native Italy, scoring two goals.