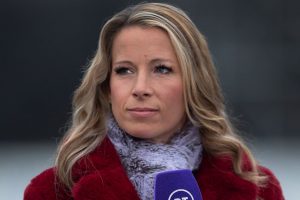 Rachel Brown-Finnis considers herself one of the lucky ones.

After all, the former England international, now a pundit on BT Sport, knows that as a female working in football, she is a prime target.

“I feel kind of fortunate in a lot of ways that I’ve not had death threats,” she admits. “Actually saying that out loud is so ridiculous, isn’t it?

“Unfortunately that’s the nature of people in my position and in positions where you have quite a large profile on social media.”

A new study by YouGov, commissioned by BT Sport, has shown that more than one in ten people have received online abuse over the past year.

Those stats are far worse for women, with one in five that received online abuse saying it was about their appearance.

“I’ve had a lot of online abuse, generally sexist abuse, but to be honest I don’t pay too much attention to it,” Brown-Finnis says.

Whilst generally not affected as much as most, Brown-Finnis has had to contend with unwanted and undeserved scrutiny for simply doing her job.

The moment which stands out came after a simple mistake in pronunciation whilst covering a game which led to floods of messages questioning her presence.

She recalls: “I got a load of criticism – ‘you should have prepared better’, and I was like, you know what, fair enough. I’m in a job where I do prepare well but I made a mistake, it’s as simple as that.

“When it then creeps towards expletives, ‘you’re just a f****** woman, you shouldn’t be anywhere near this game’, that’s when it can get you down a little bit.”

As a goalkeeper who won 82 England caps, she has learnt to develop thick skin and a short memory which enabled her to turn the incident into a positive.

“I think I’m quite good at mentally deleting stuff,” she says. “I think being a goalkeeper, you have to quickly learn to get rid of mistakes, forget them and not let it affect you.

“I turned it into a positive. What that surge of messages did, actually, was make me realise that every bit of detail and research I do has to be nailed on, 100%, otherwise I’m going to leave myself open to that.

“Anything that went above general criticism, that was criticism just because I’m female, I just deleted, because that’s just ridiculous.”

Not everyone is able to downplay those comments so easily, however.

“My genetic make-up is probably predisposed to being able to forget things, but not everyone can do that,’ she acknowledges. “And over this last 12-15 months, people have been going through all kind of things.”

It is in the quest to help those who may be more affected that Brown-Finnis is speaking out and now feels empowered to tackle the issue.

“I feel I’ve let myself down in some ways because I’ve not been proactive in blocking or reporting such incidents,” she says.

This weekend will see high-profile teams and organisations from across the world of sport boycott social media in protest.

“I think it’s great that as a collective, everyone who is involved in football is standing up, united, against social media abuse and hate speech,” Finnis-Brown says.

“I’m quite proud of BT for initiating this policy and this stance against it,” she states. "It’s going to empower me and make me take action.

“That’s making sure people are called out when they overstep the line or put something out there that’s unacceptable.

“I’m going to make sure I stand up and report it and let people know that it’s reported, because I think that’s important – sharing that empowerment.

“If I see it at a football match, moving forwards, I’ll call it out. It’s empowered me to feel I need to stand up and say, ‘that’s not OK, that’s hate speech, that’s not acceptable’, rather than just tolerating it. That’s something I feel strongly about now.

“Not being OK with it, not liking it, talking about change is one thing, leaving the ball in the court of the social media platforms is another thing.

“But as individuals, as companies, as a football family, knowing how to implement that change is a huge step.”