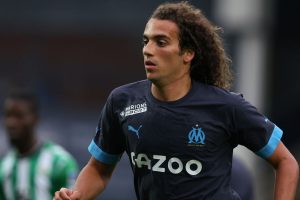 Former Arsenal star Matteo Guendouzi is the latest player to have come to blows with new Marseille manager Igor Tudor, as problems in the dressing room continue at the French club.

Guendouzi is known for being a fiery character from his time at Arsenal, and that's continued at Marseille as the midfielder remains an emotional player. But it appears that he isn't the only one to experience issues with the new manager after Jorge Sampaoli left the club this summer.

According to L'Equipe, Guendouzi had a "lively altercation" with Tudor during their 2-0 defeat to AC Milan last Sunday as their pre-season has been filled with unrest behind closed doors. Jordan Amavi and Gerson have also had issues with the new boss, and it looks as though current Arsenal star William Saliba got out at the right time.

READ MORE: Arsenal fans think they're winning the league after battling to win at Crystal Palace

The French publication reported that Guendouzi had an 'altercation' with the manager as Marseille trailed 2-0 at half-time during last Sunday’s friendly defeat to Milan. The Frenchman then went off to shower, packed up his things was nowhere to be seen for the second half.

The squad were extremely fond of former boss Sampaoli, and were looking forward to playing in the Champions League under the Argentine this season. However, the club and Sampaoli reportedly parted ways via 'mutual consent' before pre-season got underway, and Tudor has not proved to be popular thus far.

It's been reported that the Marseille players asked for a meeting with the management themselves over their dissatisfaction with Tudor's methods. Tudor has reportedly put Marseille through a demanding pre-season programme, which includes training sessions at 7pm, which has not gone down well.

Are Marseille in trouble this season? Let us know in the comments section.

But the manager has the backing of club president Pablo Longoria, who sent a major statement to any player who isn't on board with the new boss. Longoria stressed that he had chosen the former Hellas Verona manager himself, and reportedly threatened that any player who wasn't happy should come to his office and ask for a transfer.

Guendouzi's transfer from Arsenal was only made permanent this summer, after spending the previous season on loan. But the midfielder is already experiencing issues, and is perhaps regretting joining the French side.

The midfielder was on loan with former Arsenal team-mate Saliba, who Marseille attempted to sign permanently after he won the Ligue 1 young player of the season Award. But Saliba stayed at Arsenal, and won the man of the match award on his Premier League debut against Crystal Palace on Friday.