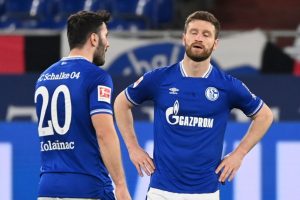 Former Arsenal defender Shokdran Mustafi has been voted the Bundesliga's 'relegated player of the season' after suffering relegation with Schalke.

The German centre-back was released by the Gunners at the start of the year and joined the Bundesliga club on a deal until the end of the 2020/21 season.

Schalke won only three league games all season and dropped out of the top-flight for the first time in 30 years.

Mustafi was part of a defensive unit that conceded 86 goals in 34 league outings, resulting in the 29-year-old being awarded an unfortunate prize.

248 Bundesliga players took part in this year's vote and named Mustafi the relegated player of the season – awarded to the individual who has endured the most difficult campaign.

A number of Schalke players were also nominated, but it was the former Arsenal man who came out on top with 13.3 per cent of the overall vote.

It has been quite the fall from grace for Mustafi, who was a World Cup winner with Germany in 2014 though is now without a club, having been released by Schalke and not offered a new contract.

The central defender was known for making mistakes during his Arsenal days as he failed to live up to his £35million price tag.

Elsewhere in the Kicker vote, Bayern Munich striker Robert Lewandowski was named the Bundesliga's best player for a fifth time having claimed a whopping 71 per cent of the vote.