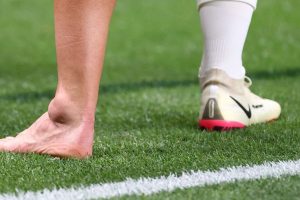 Dani Ceballos' Olympics appears to be over already after the former Arsenal midfielder suffered a painful looking ankle injury in the first-half of Spain's tournament opener.

The Real Madrid midfielder left the field barefooted with a ball-shaped lump on his left ankle after being injured by a nasty challenge from Egypt's Taher Mohamed.

Ceballos, who has spent the last two seasons on loan at Arsenal, came closest for the Spanish during the opening half after he saw a finely struck effort hit the woodwork at the Sapporo Dome in Japan.

The 24-year-old's tournament now seems to be over with Spain's remaining group fixtures taking place on Sunday and Wednesday and the whole tournament lasting just two and a half weeks.

Ceballos' ankle bent on the floor, taking the weight of his body as Mohamed stood on it as they tussled for the ball shortly before half-time.

Despite the nature of the challenge, a lengthy VAR check by Jordanian referee Adham Makhadmeh was concluded without a card being shown to the Egyptian attacking midfielder.

Ceballos was replaced by Osasuna's Jon Moncayola in what was a physical game in Sapporo, with Oscar Mingueza having already been forced off through injury after 20 minutes.

The Real Betis academy product has spent the last two seasons on loan at the Emirates Stadium, winning the FA Cup in 2020 as he made 77 appearances for the Gunners, scoring on two occasions.

Will Arsenal miss the presence of Dani Ceballos in midfield this season? Leave your thoughts in the comments section below.

He is now hoping to impress new Real boss Carlo Ancelotti on his return to the Santiago Bernabeu and was recently quoted saying: "It is clear, I would like to play for Real Madrid. But you have to know what the coach wants and you have to be objective.

"But my intention is to play for Real Madrid next year." he explained.

Ceballos has so far made 56 appearances for Los Blancos and scored five times since moving to the club from Betis in 2017 for £15million.

Spain remained unable to find a breakthrough after Ceballos' injury as they were held to a 0-0 draw against Egypt, despite including EURO 2020 young player of the tournament Pedri in their side.

Pedri was one of five members of Spain's EUROs squad to start the match, with Mikel Oyarzabal, Dani Olmo, Pau Torres and Eric Garcia all in action.

Australia beat Argentina 2-0 in the other match in Group C and Spain face the Aussies on Sunday before concluding the group campaign against Argentina on Wednesday.