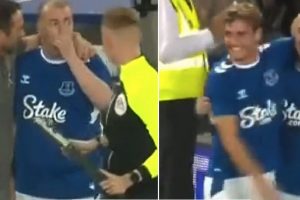 An Everton super-fan was brought on as a substitute to score a penalty during their 4-0 friendly win over Dynamo Kyiv on Friday.

The Toffees were playing the Ukrainian side in a ‘peace friendly’ at Goodison Park when manager Frank Lampard honoured die-hard fan Paul Stratton with a substitute appearance.

It came in light of Liverpool council worker Stratton’s heroic efforts in helping the Ukrainian effort by travelling to Poland in March to help refugees fleeing neighbouring Ukraine after the Russian invasion. And his unforgettable experience at Goodison was even capped off with a coolly-taken penalty after coming on for Dele Alli.

The former police officer rolled the spot-kick into the net before running behind the goal and kissing the Everton badge as he sank to his knees. Stratton was surrounded by his Everton team-mates, including Salomon Rondon, who rushed over to hug and congratulate him.

The Liverpool Echo previously reported how Stratton responded to Ukraine being invaded by swapping his week off to "watch Netflix and eat Pringles" with a trip to the Ukraine-Poland border. It is said he spent four days helping the refugees while "accompanied by a Polish phrasebook and a network of former police and army colleagues".

Stratton received comfortably the biggest cheer of them all from the Toffees faithful after being introduced during Everton’s win. He was warmly greeted by Lampard and Dominic Calvert-Lewin as he entered the field before later embracing Lampard again.

The other goals came from Calvert-Lewin heading in the fourth-minute opener from a James Tarkowski cross, before debutant Dwight McNeil went on to score twice following his move from Burnley.