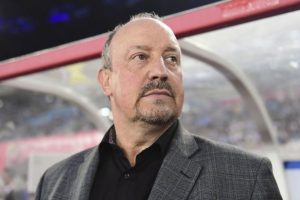 Everton have made five players available for transfer as they look to make room in their squad for potential upgrades according to reports. Rafa Benitez is preparing for his first season as Everton boss after taking over from Carlo Ancelotti, who returned to Real Madrid in the summer.

James Rodriguez, Andre Gomes, Fabian Delph, Cenk Tosun and Jonjoe Kenny will all be allowed to leave if suitable offers come in according to the Liverpool Echo.

Benitez has already brought in Demarai Gray, Andros Townsend and Asmir Begovic this summer and has now set his sights on Denzel Dumfries and Dwight McNeil.

Dumfries was part of the Netherlands’ Euro 2020 squad and Everton director of football Marcel Brands is keen for the PSV Eindhoven right-back to replace the ageing Seamus Coleman.

Burnley’s McNeil has long been linked with a move to a bigger club after a series of stand-out performances.

At just 21-years-old the winger already has 96 Premier League appearances to his name.

Boss Benitez caused quite the stir on Merseyside when he accepted the Toffees job after previously managing arch-rivals Liverpool, a club at which he won the Champions League in 2005.

An investigation was launched by Merseyside Police in June after a threatening banner seemingly aimed at Benitez was placed near his Wirral home.

“We know where you live, don’t sign,” read the banner.

But he is now looking to make his mark at the club by changing up his squad.

Two-time Champions League winner Rodriguez only moved to Goodison Park from Real Madrid last summer and impressed in the early part of his Everton career as he scored three goals in his first four Premier League games.

But he struggled with a calf injury throughout the campaign and was sidelined for a lot of games in the latter part of the campaign.

Gomes was in and out of the team under Ancelotti, while Delph has been a bit part player since moving to the Toffees from Manchester City in 2019.

Tosun, who was a £20million signing from Besiktas in 2018, has failed to impress at Goodison and was loaned to Crystal Palace during the 2019/20 season before having a temporary spell back at his former side in Turkey during the second-half of last season.

Kenny was tipped for a big future at Everton but has only managed 35 Premier League games since his top flight debut in 2017 and has been shipped out on loan on numerous occasions.

Following Benitez’s appointment, Everton’s majority shareholder Farhad Moshiri said: “Rafa impressed us greatly with his knowledge and experience but, above all, the passion and hunger he showed to join our club.

“We are appointing Rafa because we believe he will bring success to our club and to Evertonians. To put it simply – we need to be competing at the top-end of the league and to be winning trophies.

“Rafa is a proven winner with huge experience in coaching internationally and we have secured the best man to achieve that for us.”