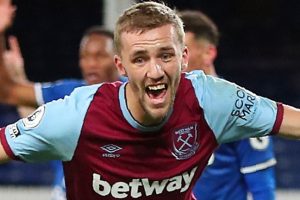 Report and free match highlights as Tomas Soucek scores 86th-minute goal to give David Moyes his first win back at Goodison Park since leaving in 2013; West Ham now unbeaten in three as Everton’s four-match winning run is ended as they muster just two shots on target

Chances were at a premium for much of the game, with only one shot on target in the first half. It came when Bernard forced a leaping save from Darren Randolph in the 45th minute, with the goalkeeper a late replacement for the injured Lukasz Fabianski.

The second half was slightly improved. Aaron Cresswell and Pablo Fornals went close for West Ham, while Seamus Coleman drew an easy save from Randolph. But the visitors finally made the breakthrough in the 86th minute as Soucek fired home after a huge deflection from Yerry Mina.

1 – West Ham boss David Moyes has secured his first win at Goodison Park in five visits in all competitions since leaving Everton in 2013 (L4). Relief. pic.twitter.com/7b3e6uPdii

Everton miss the chance to go second and remain in fourth ahead of the rest of the weekend’s games, with their four-match winning run ended. West Ham remain in tenth but go level on 26 points with five other Premier League teams, and are now three matches unbeaten. 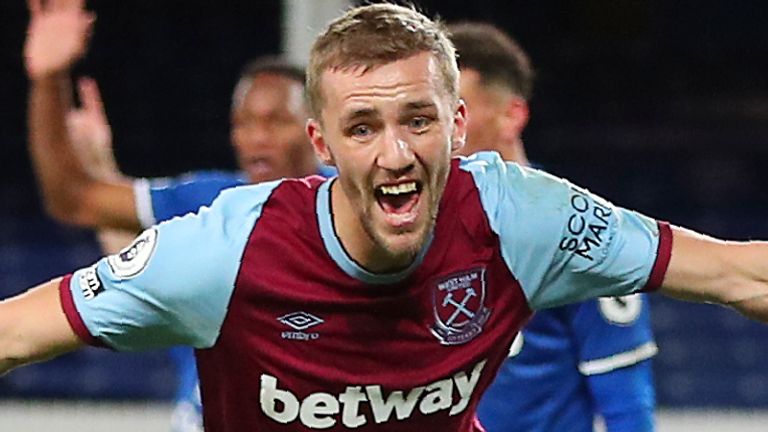 Despite the fireworks of New Year’s Eve, the first half failed to set the world alight with no shots on target from either side until the 45th minute. Dominic Calvert-Lewin and Sebastien Haller both glanced headers well wide from corners in the pick of the opening half an hour.

West Ham had the first real sight of goal. Jarrod Bowen, Haller and Said Benrahma worked the ball through the area before Cresswell was played in on the left. He flashed the ball across the face of goal with a wicked effort, but Bowen was unable to poke it home at the back post.

Man of the match: Tomas Soucek.

Randolph had placed Fabianski late in the warm-up after the regular West Ham No1 sustained an injury, but showed superb concentration when he saved from Bernard just before the break. Craig Dawson nodded away Gylfi Sigurdsson’s corner, but only as far as the Everton winger. He took a touch before sending a fierce volley through the area, but Randolph made a superb, leaping save to keep out the only shot on target of the first half.

Ten minutes into the second half, West Ham went close after Cresswell played a free kick down the channel for Declan Rice. He then flashed a cross into the area but Haller could not get there in time to turn home.

It was another Cresswell free kick that finally drew a save from Pickford after the hour mark. He whipped an effort in from the right, but the England goalkeeper stretched to keep him out. Shortly after, Fornals fired a volley through a packed area, but it went straight at Pickford. It was similar story at the other end as Coleman tried to open things up for Everton, but could only find Randolph’s waiting arms. 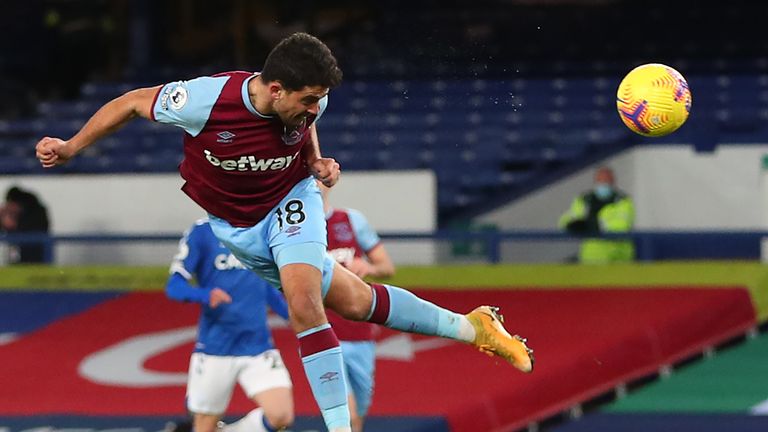 Fornals had a gilt-edged chance to put West Ham ahead in the 64th minute. Bowen floated a cross into the middle, but the Spaniard could only send his free header wide as the wait for a goal continued.

Both sides made a raft of attacking changes – returnees Michail Antonio and James Rodriguez introduced for their respective sides – but it was the ever-reliable Soucek who popped up to win it for West Ham. His initial effort was saved by Pickford, but the rebound only went as far as Cresswell. 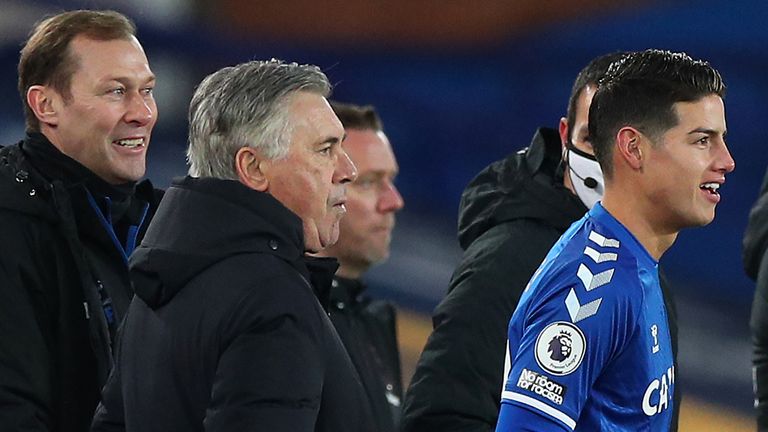 He thundered a shot into the area, which diverted into Soucek’s path by Mina’s foot. He then slotted home at the far post for his fifth Premier League goal of the season.

Man of the match – Tomas Soucek

It’s always easy to give the man of the match to a goalscorer, but Soucek was more than just goals against Everton.

He helped gain possession a huge 15 times and made the most passes of the West Ham side (56), with 41 of those completed successfully. Up front, both of his shots were on target and of course, one of them was the much-needed winning goal.

It was his fifth league goal of the season and makes him West Ham’s top scorer. What a find he is turning out to be.

Both teams are in FA Cup action next weekend. Everton host Rotherham on Friday January 9 while West Ham travel to Stockport on Monday January 11.

Everton will then travel to Wolves in the Premier League on Tuesday January 12, live on Sky Sports; kick-off 8.15pm. West Ham welcome Burnley in their next league fixture on Saturday January 16; kick-off 3pm.