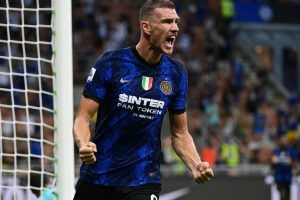 Serie A: Inter off to winning start

Debutant striker Edin Dzeko was on target as Inter Milan got their Serie A title defence off to a flying start, thrashing Genoa 4-0 in their opening match of the season in front of fans in the San Siro on Saturday.

Hakan Calhanoglu, who crossed the divide to sign for Inter from city rivals AC Milan in the summer, took centre stage from the off, setting up Milan Skriniar for his side’s sixth-minute opener, before drilling home a second eight minutes later.

The visitors had a great chance to get back in the contest just before the interval, but Yayah Kallon dragged his effort wide from a good position.

That miss proved costly as Inter, who had two strikes ruled out for offside, the second of which was another fine finish from Calhanoglu, added a third in the 74th minute through substitute Arturo Vidal to make sure of the three points.

To complete the perfect afternoon for Inter, on his 200th Serie A appearance, veteran forward Dzeko, who joined from Roma this summer, headed home a late fourth. Freiburg rose to second in the Bundesliga table on Saturday thanks to a gritty 2-1 win over a Borussia Dortmund side who dominated possession but failed to convert their chances.

Vincenzo Grifo rocked the visitors early, putting Freiburg ahead with a stunning free-kick in the sixth minute. Dortmund midfielder Jude Bellingham came closest to an equaliser in the first half, hitting the post with a header from a corner.

Despite Dortmund keeping possession for long spells, they found themselves two down eight minutes into the second half when Roland Sallai slammed the ball home from close range.

Dortmund were thrown a lifeline when midfielder Yannik Keitel steered a low cross past his own keeper in the 59th minute. But the Freiburg rearguard stood firm to repel Erling Haaland and company as they hung on to win.

Elsewhere, Wolfsburg went top of the standings by coming back from a goal down to beat Hertha Berlin 2-1, with Lukas Nmecha getting the winner in the 88th minute.

Bochum forward Simon Zoller set up a goal in each half as his side beat Mainz 2-0, and Greuther Furth came back from a goal down to grab a point against 10-man Arminia Bielefeld, while Eintracht Frankfurt and Augsburg played out a scoreless draw.