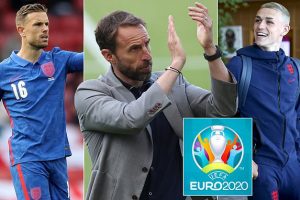 LIVE: Euro 2020 build-up – All the latest news and pictures with just TWO DAYS to go until the tournament kicks off in Rome… as England put the finishing touches on their preparations ahead of opening clash with Croatia

The wait is almost over. We are now just two days away from Euro 2020, with Turkey vs Italy kicking off the tournament on Friday, June 11.

England will have to wait until Sunday to get their tournament underway in a mouth-watering encounter with Croatia, while Wales play Switzerland on Saturday, with Scotland up against the Czech Republic on Monday.

With Ben White replacing the injured Trent Alexander-Arnold in the England squad, and with Harry Maguire and Jordan Henderson both lacking fitness, Gareth Southgate has a selection headache on his hands.

But the news isn’t just with England, it’s coming in thick and fast with all 24 teams gearing up towards their opening fixtures.

Follow Sportsmail’s SAM McEVOY for live updates as we take you through the latest news in the build-up to the European Championship.

It’s almost here… after what has seemed like a lifetime, the Euros is just 48 hours away following a year’s hiatus due to the pandemic.

Friday will see Turkey and Italy kick things off in the tournament’s opener and it promises to be a cracker.

For England fans, they’ll have to wait a little bit long before they can see the Three Lions in another major tournament once again and there’s a lot of pressure to finally bring football home.

Stay with me for all the latest news and updates ahead of the tournament throughout the day.