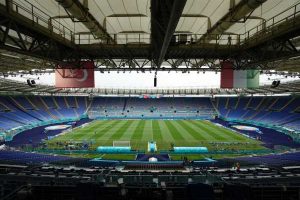 Italy host Turkey in the tournament opener at the Stadio Olimpico, 12 months later than planned after the coronavirus pandemic forced a postponement. But a year on, 24 countries are ready to battle it out for the right to be crowned the continent’s best.

Martin Garrix, Bono and The Edge will take centre stage for the traditional curtain-raiser with a virtual performance that will use cutting-edge technology to bring fans closer to the festivities. Uefa have confirmed the three will perform a rendition of official tournament song We Are The People ahead of kick-off before Italy and Turkey get things going for real in the first match.

The performance, that Uefa say is themed around a real-life live stadium gig, will weave the song’s lyrics of “hope and positivity”, together with “powerful imagery brought to life by technology”, including the pitch being transformed into a blue-white flame, energy fields created from millions of light particles and Bono projected on to the stage. It was filmed in state-of-the-art motion-control studios in London, and at the Olimpico in Rome, to recreate the stadium environment in 3D.

Follow all the latest as Euro 2020 gets underway tonight:

Italy have never lost at the Stadio Olimpico in a major tournament – World Cup or European Championship – winning six and drawing two. They also haven’t conceded a single goal in each of those last seven games.

Can Roberto Mancini’s side continue such form?

Immobile is Italy’s key to success

Singled out by Italy’s World Cup winning coach Marcello Lippi, Ciro Immobile won the coveted European Golden Shoe award when he matched the Serie A record with 36 goals during the 2019/20 season. However, the Lazio striker has failed to replicate his club form on the international stage.

Having averaged 25 goals per season over his last five Serie A campaigns, the 31-year-old has underwhelmed for his country with just 12 goals in 45 caps, with many coming against European minnows.

Group games against Turkey, Switzerland and Wales offers Immobile a fine opportunity to improve upon this record.

Zeki Celik impressed in his 27 appearances for Lille this season, scoring three goals and providing two assists as the club stunned PSG to win Ligue 1. His performances have sparked interest from a number of Premier League clubs including Manchester United, Arsenal and Tottenham.

Celik did not register any assists during qualification for the tournament, but the 24-year-old is a modern full-back. He made eight starts on the right-hand side of defence during the campaign.

Up front, Burak Yilmaz is Turkey’s second-highest scorer of all time, with his 29 goals putting him behind only the retired Hakan Suker. At 35 years old, he perhaps won’t reach Suker’s 51 goals – but the Lille striker is in excellent form as he netted 18 goals in all competitions last season.

The Italian government announced that the Stadio Olimpico can be filled to 25% capacity for the four games it will host, allowing up to 15,948 spectators.

Fans arriving at the stadium will have their body temperature measured by thermal scanners, and anyone with a fever or other coronavirus symptoms will be ushered to a quarantine area.

While more than 2,000 tickets for the opening game were sold in Turkey, many of those fans are not expected to travel to the match.

Can Italy utilise the home advantage?

Turkey vs Italy: Head-to-head between the Euro 2020 openers

Turkey and Italy’s only previous encounter in a major tournament was at UEFA Euro 2000, also on 11 June rather remarkably.

It was their opening game of the tournament and finished 2-1 to Italy courtesy of goals from Antonio Conte and a penalty from Filippo Inzaghi. With his equaliser, Okan Buruk scored Turkey’s first ever goal in the European Championships.

Italy have never lost against Turkey despite facing them on 10 previous occasions, winning seven times and drawing three.

Turkey are set to partner Juventus centre-back Merih Demiral alongside Leicester City’s Caglar Soyuncu with Okay Yokuslu – who spent last season on loan at West Brom from Celta Vigo – at the base of midfield.

Cengiz Under is expected to get the nod, playing back at the Olimpico following his loan spell at Leicester from Roma.

Italy have asked UEFA for permission to replace Lorenzo Pellegrini with Fiorentina’s Gaetano Castrovilli in their Euro 2020 squad after the Roma midfielder picked up an injury, the Italian Football Federation (FIGC) said on Thursday.

Manuel Locatelli is set to start in midfield with Marco Verratti still stepping up his fitness. Mancini puts his faith in the solid defensive triangle of goalkeeper Gianluigi Donnarumma and his two centre-backs Bonucci and Giorgio Chiellini.

Gunes ready to ‘spring’ a surprise

Turkey took four points off France in qualifying, including a 2-0 win over the World Cup winners, and lost only one of their matches to finish second in Group H.

Head coach Senol Gunes has guided the Crescent-Stars back to major tournaments, and has earned them a ‘dark horse’ label.

“Being in this tournament and playing in the opening match makes us proud. In every opening game there are surprises and I hope we can also spring one.”

Marcello Lippi believes Nicolò Barella and Ciro Immobile will be Italy’s key players at Euro 2020, but warns: ‘It’s not like in 2006’.

“I can see Italy have self-esteem and the quality to reach a great result. There is ambition and a solid base, but it’s not like in 2006 when we played more games before the beginning of the tournament,” the 73-year-old said.

“However, the reality is that Italy always play to win, every time we play a big competition. If we’ll be lucky enough and all the players will be fit, then everything is possible.”

“I see two players who can be decisive. The first one is Nicolò Barella, because he does everything top players do in his position. He attacks and defends, he has the confidence to shoot from outside the penalty area, he is the prototype of a great international midfielder.

“The other one is Ciro Immobile. I trust him and I think the right moment has come to reap the rewards of his hard work,” the former CT continued.

“[Roberto] Mancini has done so much. He boosted the team’s self-esteem, Italy play offensive football and the coach knows how to win.”

Turkey vs Italy: Defensive masterclass on the cards

It’s certainly going to be an interesting opening match, with two sides that dominate defensively.

In the blue corner, Italy have won their past eight matches without conceding a goal and have 20 clean sheets in 32 matches since Roberto Mancini took over as coach.

In the red corner, one of Turkey’s key strengths is their solidity at the back. Gunes’ side allowed only three goals in qualifying and managed to keep in-form forwards Memphis Depay and Erling Haaland out during recent World Cup qualifiers against the Netherlands and Norway.